It was an unseasonably mild November in Dromore to welcome back the start of the McGrady’s Financial Services Junior Cross Country Series for 2022/2023.
Being a year older comes with new challenges so alongside welcoming fresh faces to the series, we had the returning veterans of McGrady’s faced with additional distance to their routes.
For a change, runners arrived to zero wind, temperatures of 14 degrees and thankfully the ground was still quite tight underfoot. With the biggest decision being, shall we opt for the spikes or would the trails or trainers be stable enough.
Regardless of footwear choice, every race offered notable moments of true athleticism, determination and many memories made.

The day kicked off with the P4s and under races. These races are the ones everyone always remembers. Over the years, this race has been the first race many of our young folk have ever taken part in and this year was no different.

For the boys, fresh from his baptism of fire at Comber a few weeks back, Harry Flynn put in the finish of a lifetime to pip Murlough’s Adam Brennan on the line to take 3rd place in 2.02. Remembering that you keep running until you are well past the finish line. Mark McDonald put in an amazing run, pushing through the final 200m to finish in 2.30.

Next up the girls took to the line proving that an extra year makes all the difference to your confidence and self belief. This year Cliona McAleenan put behind her the overwhelming experience of her first race at McGrady’s last year and with a year of watching and taking note as her older siblings raced, proved that all she needed was time. She lead from the off and put in an amazing time of 1.53 showing that the youngest of the McAleenans is definitely one to watch. She was soon followed by three more of the Newcastle Team who have also proven that with time they can reach their full potential with Meabh Flynn, Sophie Kerr and Rua Gosling taking 4th, 5th and 6th place.
An honourable mention to the exceptionally short legs of Charlotte Kerr that bounced around the 500m alongside her curls. Smiling from ear to ear and independently navigating the course, with the support of her sister and every onlooker in Dromore. As a junior with a mere 4 more years within this category, she is already demonstrating the resilience and class of a young athlete.

Regardless of how many times you remind them to check their laces, there is always one who finishes the race with either their shoe in hand or an undone lace. This time it was U10 Ulster Champion Harry McVeigh who kept himself firmly in 1st gear due to a rogue open lace. Needless to say this wasn’t the plan but he handled the minor obstruction well to take first place in the P5 boys race, 7 seconds in front of the battle for second place which saw Rossa McAleenan take third place behind East Downs Mark Canavan after a hotly contested battle. Cuan Murray found his stride as he entered the final stages and crossed the line in 2.58.

Elizabeth Houston was the only Newcastle AC representative in the P5 girls race and she ran a solid race to take 3rd place, crossing the line with a huge smile, doing the club proud.

The P6 boys race was a great race to watch. With recent Newcastle AC addition Rory Quinn setting the pace from the off, he was matched by Murlough ACs Fionn O Rourke and club mate Senan Gosling. All three boys, who know each other from other sporting events hustled for the front position throughout with Fionn winning the battle quickly followed by Senan and Rory. Luke McDonald dug deep to hunt down the runner in front and with a few more metres would have caught him. He finished in 5.19.

The effortless and elegant form of Emily Kerr was the first to cross the line of the P6 girls race. As her race strategy develops and her inner belief in her abilities grow, Emily sat behind an early leader knowing she could maintain that pace over the full 1000m. This allowed her to cruise past mid race and secure the win with 18 seconds to spare over second place. The mid field battle allowed Isla McMullan to weave through and move up the gears a lot quicker than those around her to take 4th, only 1 second behind 3rd.

The P7 race became a mixed event with both the boys and girls running together due to numbers. Hidden in amongst of full field of young ladies where four P7 boys, including Newcastle’s Connaire Og McVeigh. The addition of the P7 girls to the race allowed the regular training partnership of Saorlaith McAleenan and Connaire Og to work off each other and push each other around the course. Connaire Og secured 3rd place.
As for the girls, it was a full Newcastle Podium with Saorlaith McAleenan ensuring that she continues to top this category finishing 27 seconds in front of 2nd in 4.51. Club mates Mary Houston and Alana Flynn pushed each other around the course and kept the threat of the runners behind at bay to take 2nd and 3rd place. Aoife Grant saw the finish line in the distance and took off, determined to hunt down the girls in front. Making light work of navigating through the gaps and passing two further runners to finish in 5.57.

The Year 8 boys race hosted an exciting battle between last year’s series winner Fiachna McAleenan and Darragh Kerr. Darragh has really come into his own this year and putting faith in his training when it comes to racing. He sat in tight behind Fiachna for the duration of the race and when he kicked unexpectedly, Fiachna had to dig in and stretch it out to secure the win. This will definitely be the category to watch as the series progresses. New addition Fionn McEvoy had an amazing first run within the series to finish in 7.32.

A large field of 11 Year 8 girls took to the line for their 2 larger laps to make a 1400m route. Maisie McVeigh lead from the front and was closely tailed by Dromore ACs Mollie Tumilty throughout. A well paced race but with 150m to go, Mollie switched up the pace and Maisie couldn’t match it, this time. Though a 6.20 minute mile pace isn’t to be overlooked as an extraordinary pace. Club mate Niamh Watson, who put in a strong race at Comber a few weeks back crossed the line in 6.32 showing the extent of her ability within this category.

Another mixed race allowed for the Year 9 boys and girls to pitch their talents against each other. Welcoming Jamie O’Flaherty back to the racing circuit, he put in an amazing 1600m run to secure first place in 5.49. Our Year 9 girls had already had a busy morning prior to toeing the line shortly before 2pm on Sunday. Erin Easton and Sarah Uhomoibhi had been selected to attend County Trials on Sunday morning for their respective GAA clubs. After giving their all and putting the valuable skills gained through athletics into practice on the pitch, they went out and ran a phenomenal race with Erin taking first place and Sarah taking second. Club mates Piera Corrigan and Clara Flynn also demonstrated that those Monday night speed sessions are paying off to put in times of 7.35 and 7.42.

It was hard to believe as the Year 11 and over runners toed the line that not so long ago, they were the ‘little juniors’ running in the Primary age groups. Having come through the ranks and now outstanding young men and women in their own right and amazing athletes who our Juniors aspire to be, they still have the same grit and determination they had as youngsters.

Ethan McMullan presented East Downs Ollie Robinson with a hard challenge over the 2000m. Ethan has clearly benefited from a more structured training plan and is beginning to believe in his ability and talent as a runner finishing only 4 seconds behind in second place.
Friendship was put to the sidelines when Oliver Corrigan and Yasin Brannigan matched each other, stride for stride around the 3 large laps however it was Oliver who engaged his infamous sprint finish to finish just ahead of Yasin after a close race. Euan McIntosh, another of our Juniors who has really come into his own this year, ran a steady and controlled race to finish in 8.25. Callum Flynn continued the exceptional overall performance from the Flynn Family on the day at Dromore to finish in 8.43.
Sophie Neill, fresh off the steep learning curve of Comber Cross Country, was more at home in the smaller numbers of Dromore. She ran a steady run, stretching out her stride on the final lap, allowing her to elegantly swoop down the final straight in 10.56.

A great performance from all our Juniors which was helped by the fantastic organisation of the day by Dromore AC, the spectators and all the support from the families and friends who ensured the young people were all there to participate and continue to support this series. 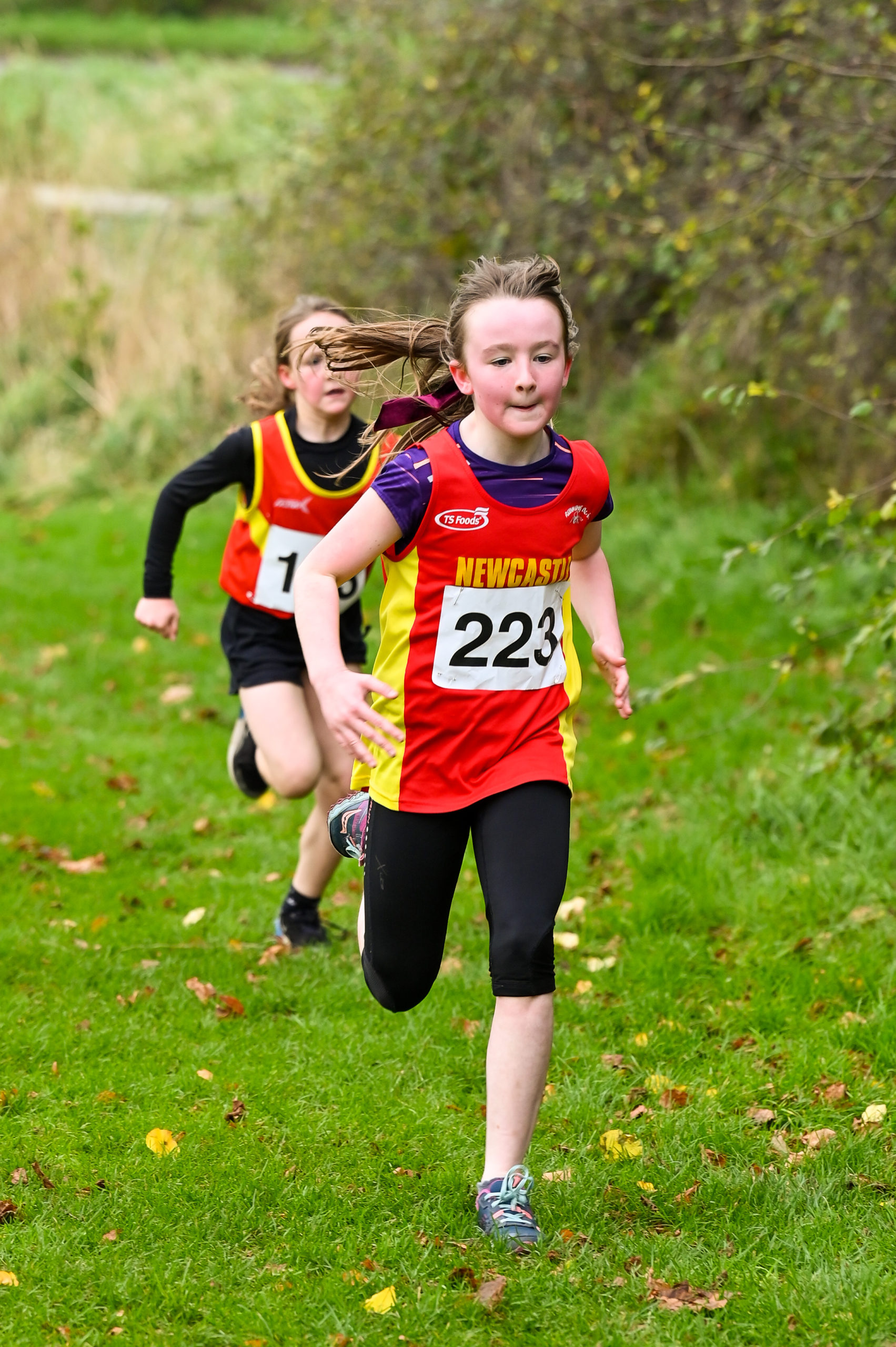 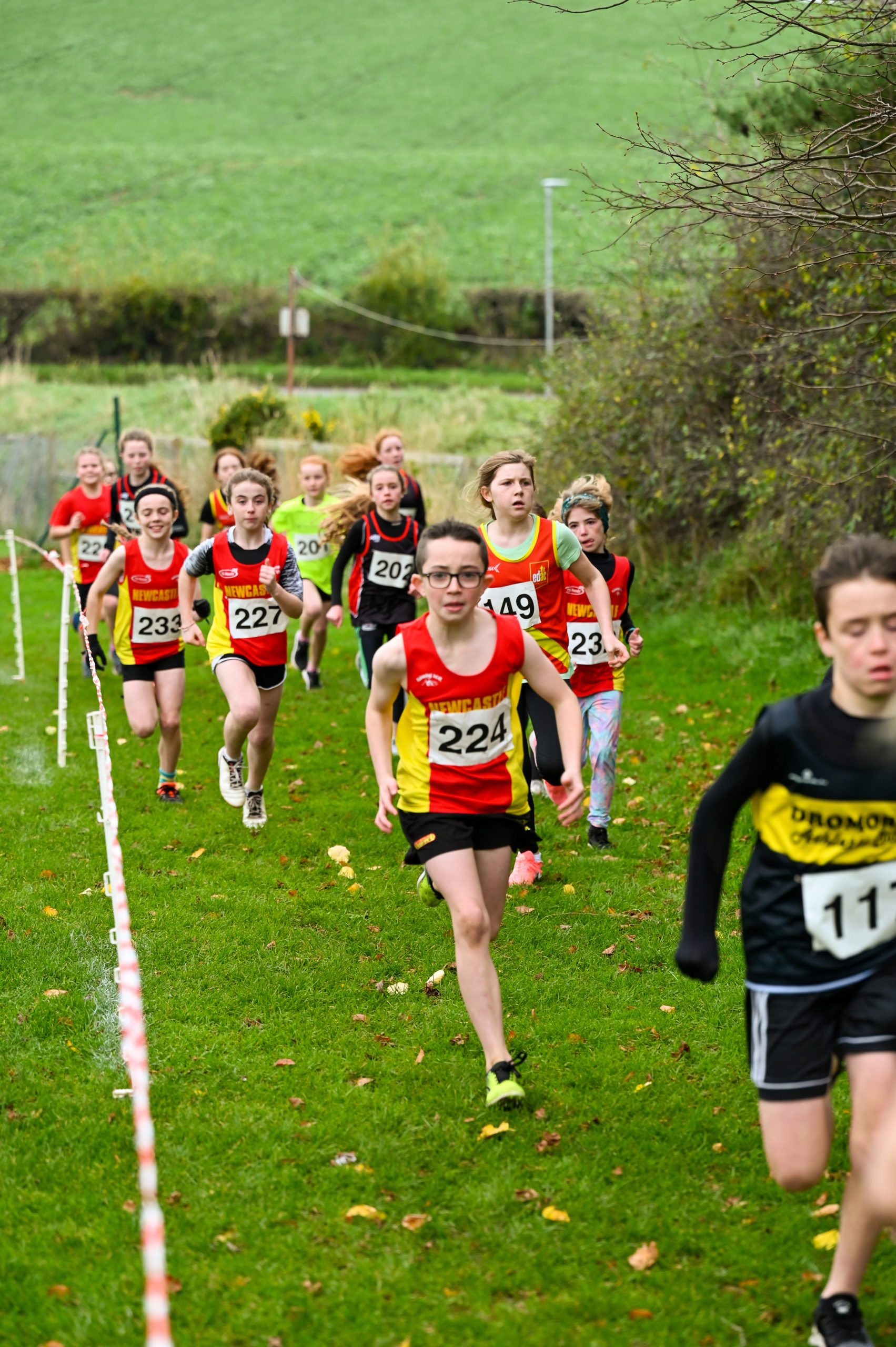 Connaire Og McVeigh leads out the charge during the P7 race 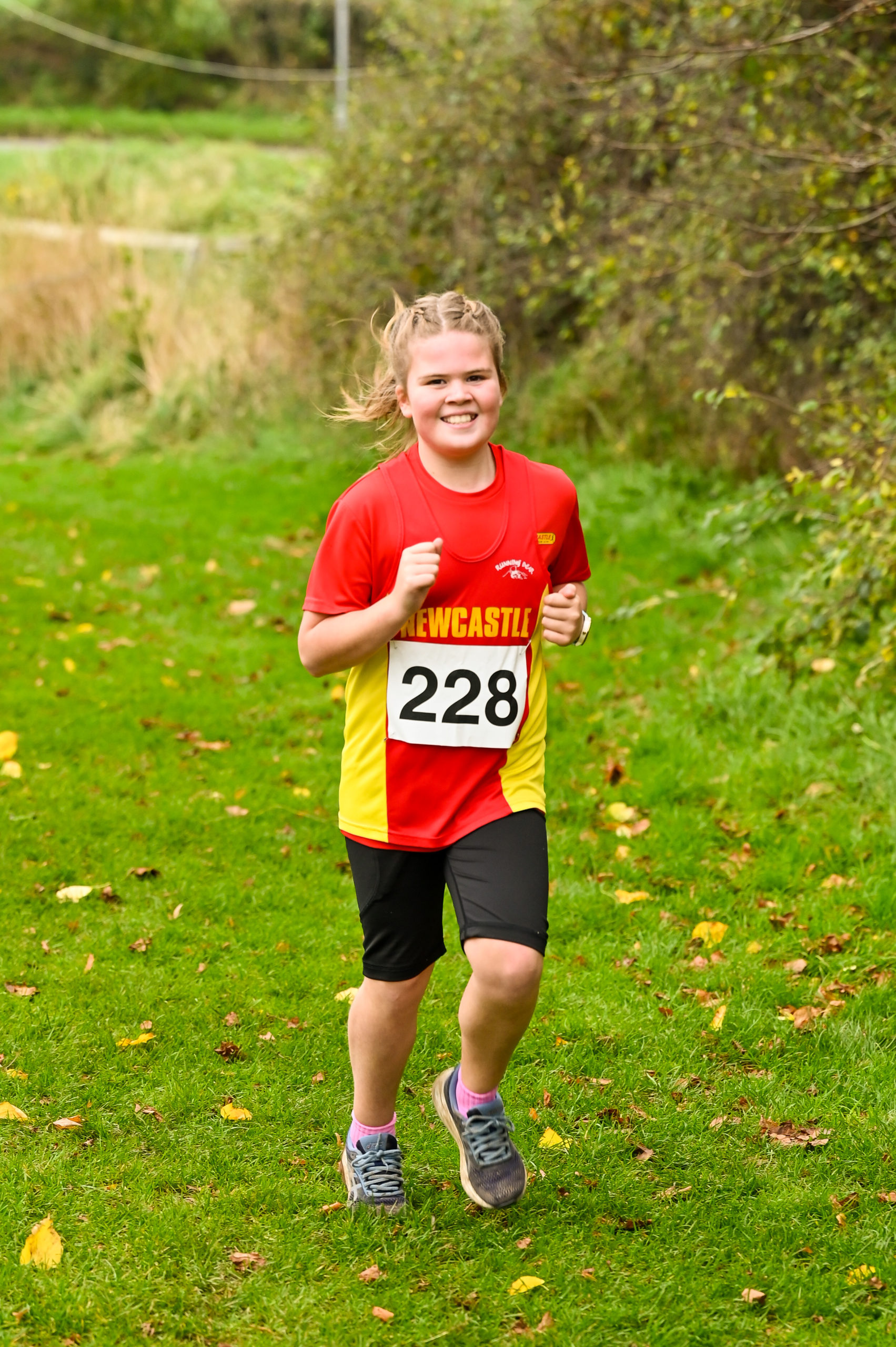 Face of the race Aoife Grant 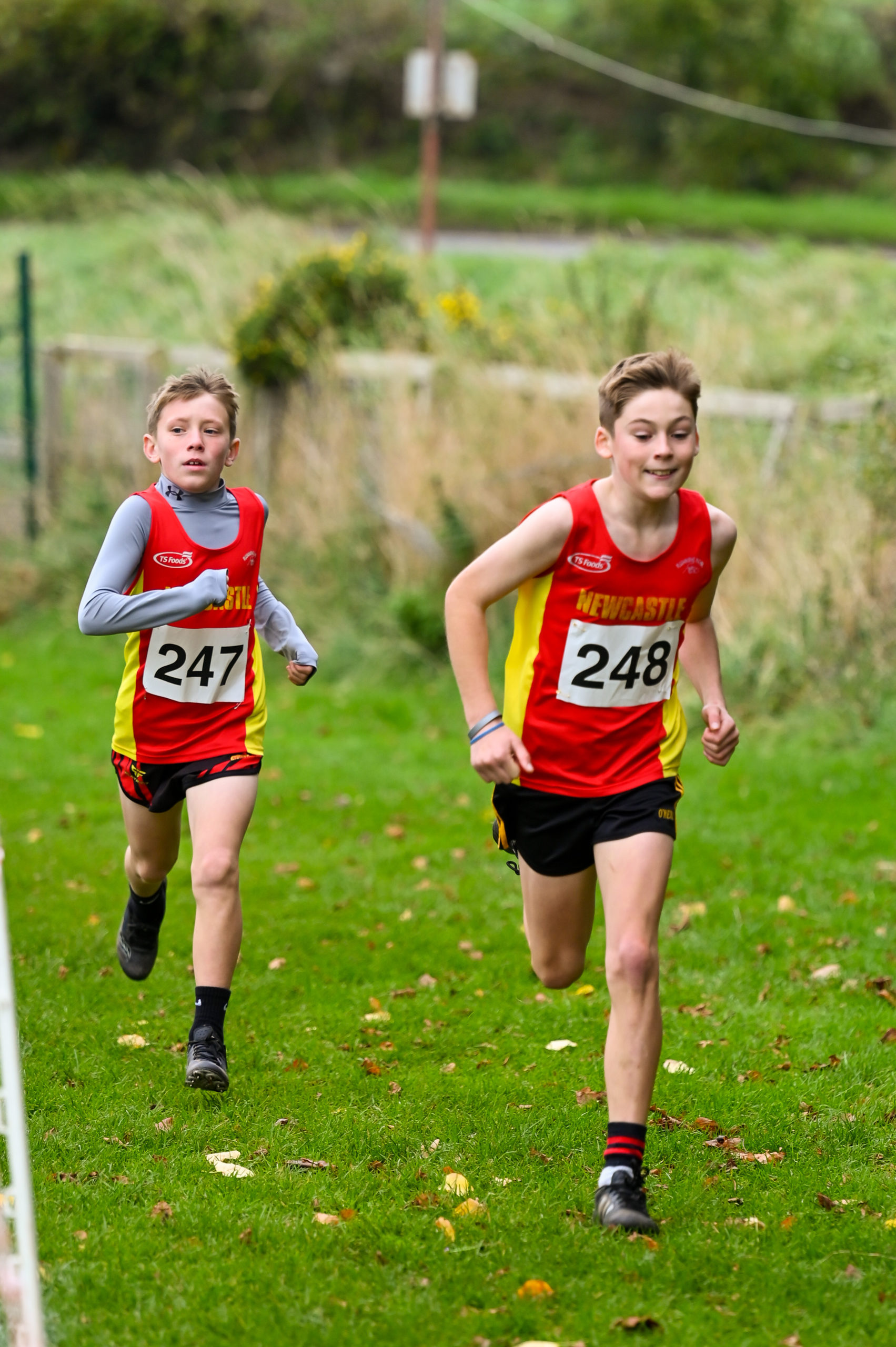 Year 8 boys Fiachna and Darragh battle it out. 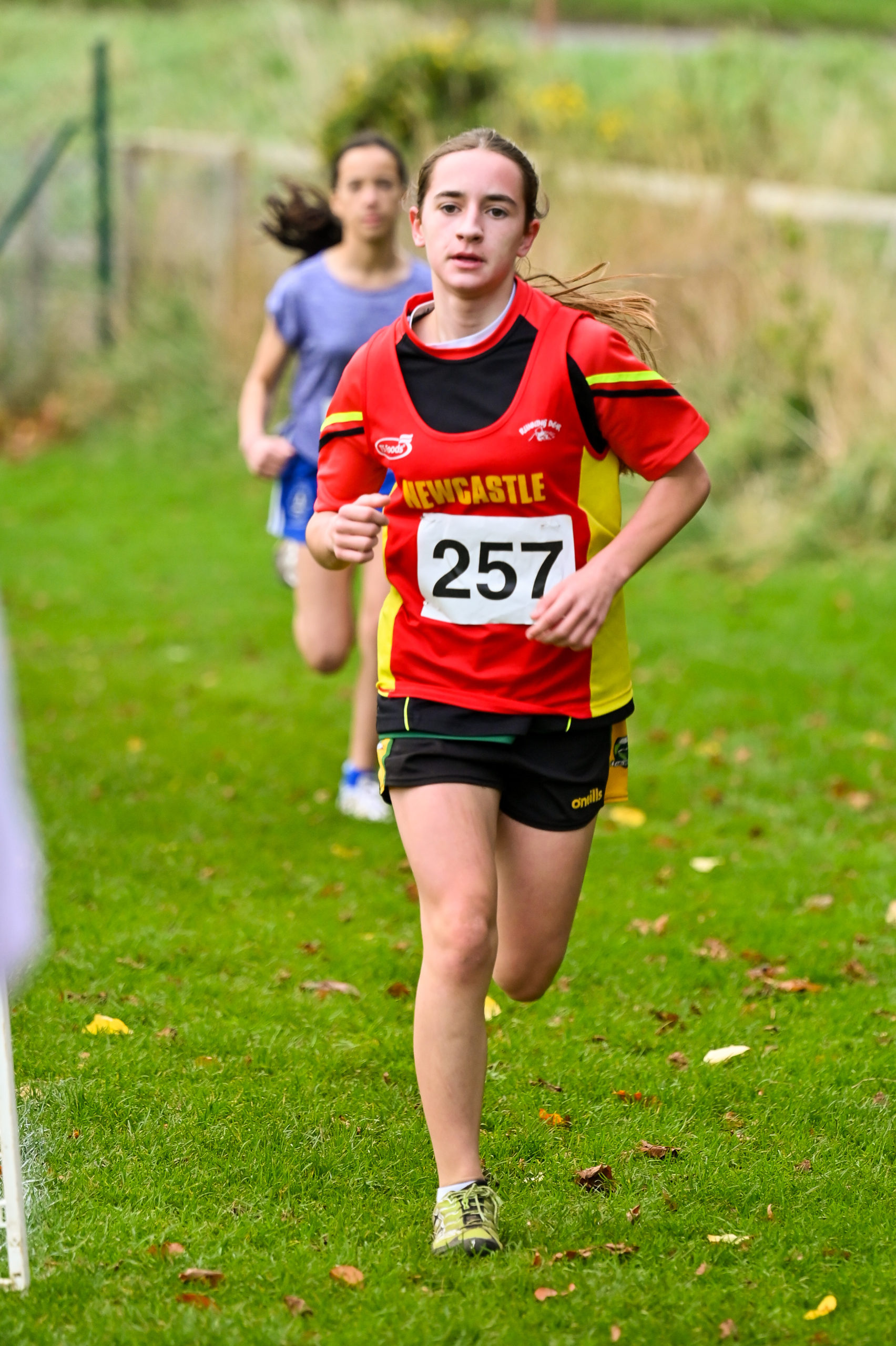 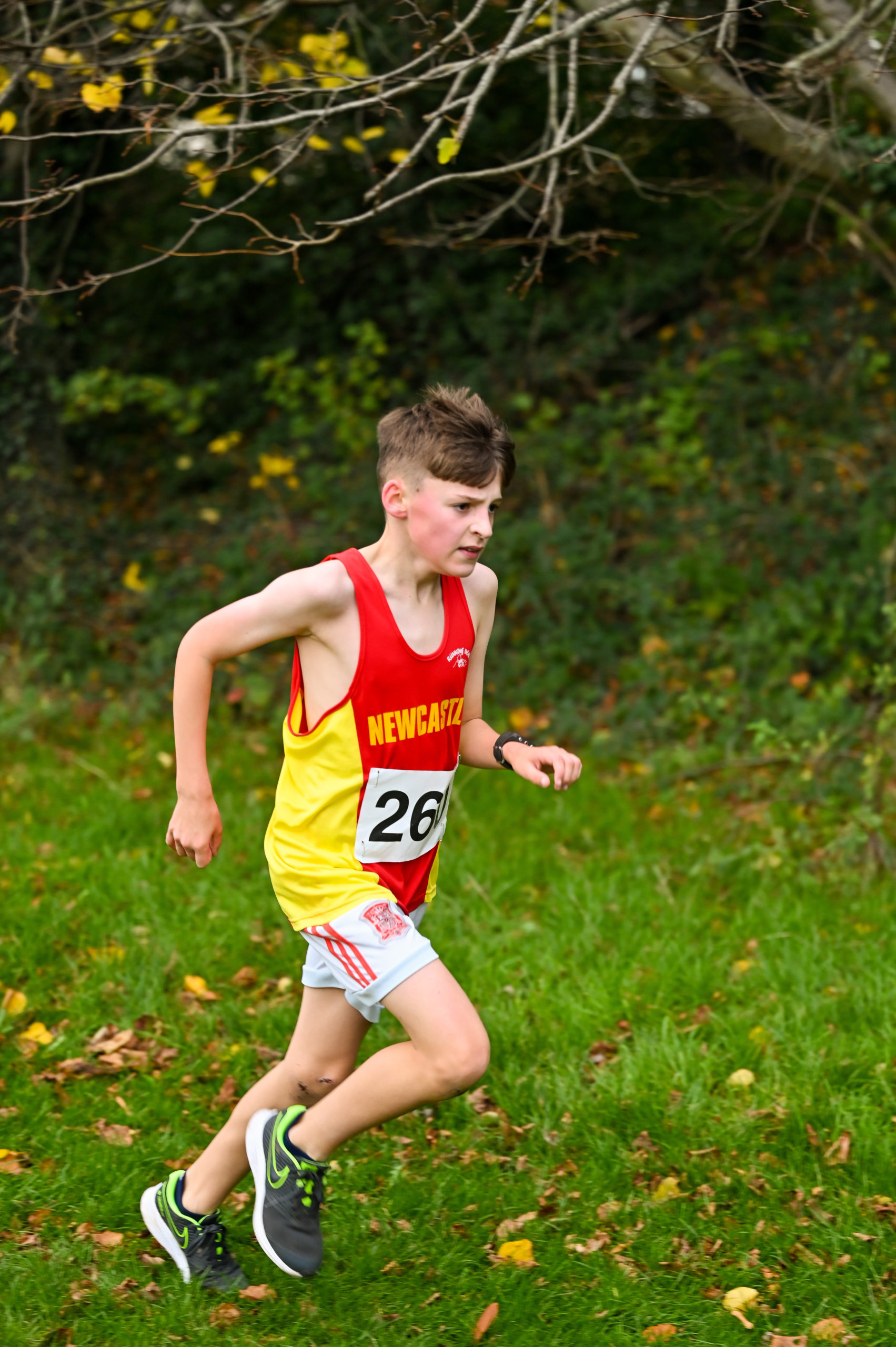 Jamie O’Flaherty back on form The youngest runner of the day Charlotte Kerr