The annual Castlewellan Christmas Cracker has become part of the lexicon of athletes and occasional runners across Northern Ireland and is now as much a part of the festive season as turkey, mince pies and the visit of the big fella with the red suit and the white beard. The enthusiasm generated by the event is evident in the quick sale of the 750 places available for teams of two soon after they were released in October. Invariably, situations change and teams are changed as illness, injury or other commitments take priority. Notwithstanding these vagaries of life, the market town was awash with colour as the minutes counted down to Uncle Frank’s whistle to set the masses on their way. 651 teams completed the course and the positive feedback testified to the hard work that had made the event happen.

Last year’s mantra was stun ‘the legs and play with the mind’ and we were left to wonder what tagline would characterise the 2023 version. In the end it was declared that ‘keep them wondering and bite hard at the end’ was an apposite summary for what unfolded. Phrases like ‘Jimmy King’s ground is under 2 feet of water’ did little to assuage the fears of the small number of those with a glimmer of an idea as to where the course would potentially go. END_OF_DOCUMENT_TOKEN_TO_BE_REPLACED

She was joined by club mate Saorlaith McAleenan, who with still a year to spare in this category and the same unwaivering love for Bunkers Hill that her friend Maisie has, had qualified for the County Down squad. Forever learning, race by race and training session after training session, applied those lessons to her race plan. Saorlaith elegantly strode around the course to finish in 101th place. END_OF_DOCUMENT_TOKEN_TO_BE_REPLACED

It was an unseasonably mild November in Dromore to welcome back the start of the McGrady’s Financial Services Junior Cross Country Series for 2022/2023.
Being a year older comes with new challenges so alongside welcoming fresh faces to the series, we had the returning veterans of McGrady’s faced with additional distance to their routes.
For a change, runners arrived to zero wind, temperatures of 14 degrees and thankfully the ground was still quite tight underfoot. With the biggest decision being, shall we opt for the spikes or would the trails or trainers be stable enough.
Regardless of footwear choice, every race offered notable moments of true athleticism, determination and many memories made.

The day kicked off with the P4s and under races. These races are the ones everyone always remembers. Over the years, this race has been the first race many of our young folk have ever taken part in and this year was no different.

For the boys, fresh from his baptism of fire at Comber a few weeks back, Harry Flynn put in the finish of a lifetime to pip Murlough’s Adam Brennan on the line to take 3rd place in 2.02. Remembering that you keep running until you are well past the finish line. Mark McDonald put in an amazing run, pushing through the final 200m to finish in 2.30. END_OF_DOCUMENT_TOKEN_TO_BE_REPLACED

On Saturday, after a two year absence, Ernie Hall and Connaire McVeigh made the trip to the real home of Irish Cross Country, Santry Demesne in Dublin for the 33rd British and Irish Masters (5 Nations) championships.

After a week of wind and rain, it was refreshing to embrace the mild temperatures and pull on the Northern Ireland vests to pit the best our nation could offer against our neighbouring countries.

After a hard fought battle at the trials in Belfast only a few weeks ago the club was proud to have Ernie and Connaire representing Northern Ireland.

Ernie was running in the V70 race. He took 13th place within his age category and helped his Northern Irish Team to take home the silver medals. Connaire, along with the full family support crew, raced a few hours later in a highly competitive race from the gun. Connaire worked his way around the 8k course in the V45 race where the NI team to secured bronze medals in the team event.

With both men bringing home the bling north of the boarder, there’s still plenty of love for cross country to be found with these two veterans. 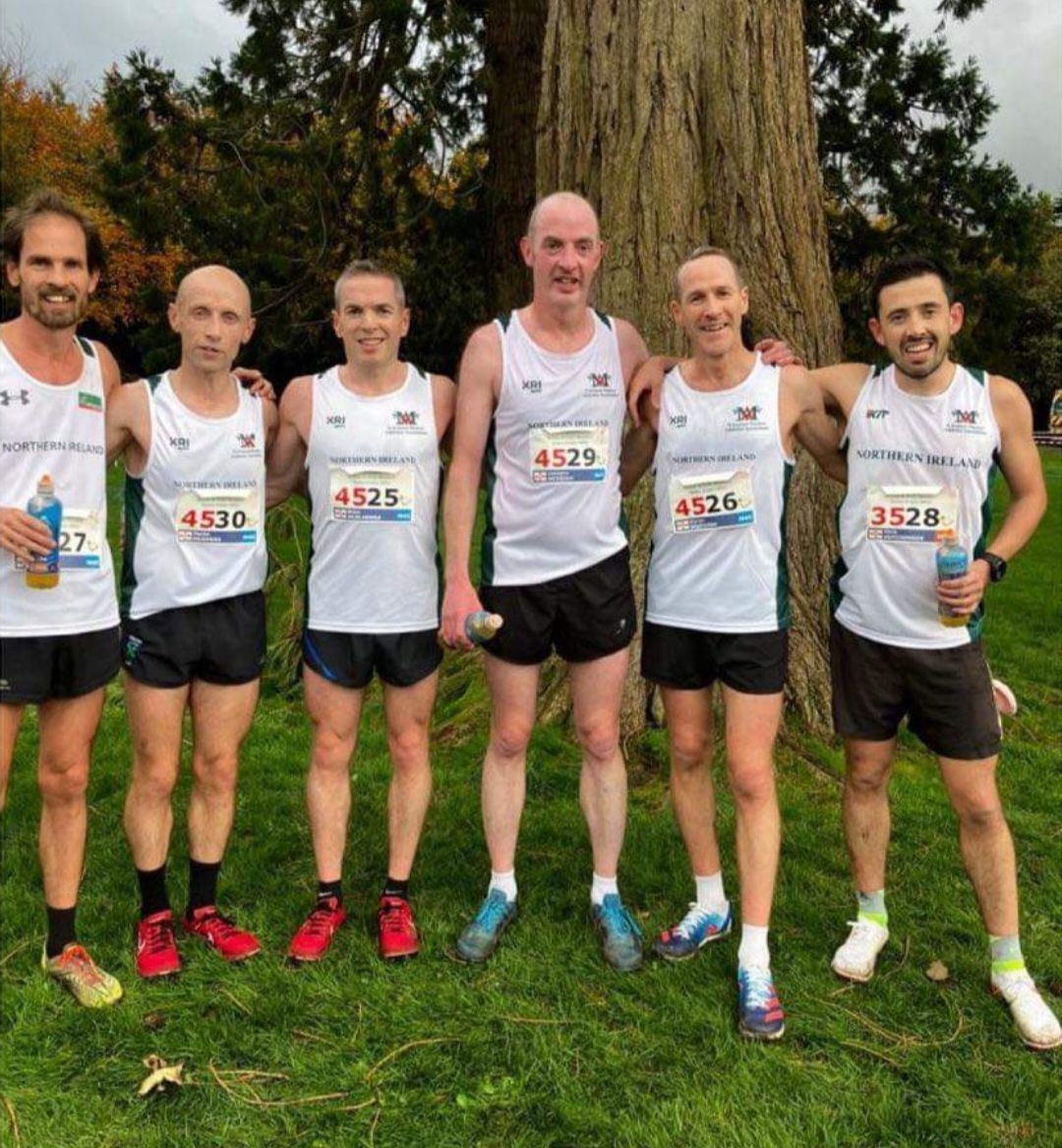 Connaire trying to get last minute racing tips from his team mates.

Full Series Information and a link to the Online Registration Form is now available by clicking the below button.