The Castlewellan Christmas Cracker by Bogusboy

It was one of the best kept secrets in history. Even his wife did not know the course. His close friends and running colleagues tried every trick in the book to ascertain the route for the annual Castlewellan Christmas Cracker, but uncharacteristically the Prophet remained tight-lipped and taciturn. The usual platitudes and prosaicisms were thrown out by way of appeasement, but they threw no light on the course that has been in the planning since January 2019. Phrases like, ‘there is something for everyone’, ‘there will be a few good climbs’, ‘we will go through a field or two’ and ‘I still have a few ditches to clear’ served only to add intrigue and mystique to the potential route.

From 11am, parking spaces were snaffled up as the growing crowds made their way to collect their numbers, totally unaware of what lay ahead, another unique characteristic of this now iconic event. When we go to races we usually know what lies ahead as it will be the same as the previous year: not so with this one. This led to great speculation at registration and the passing of spurious rumours, ‘I’ve heard it is Foxes green first’, ‘Bunker’s Hill is the first climb’, ‘the gates at Niall King’s place are open and that can only mean one thing!’ Those unwise enough to listen were tormented, while the more sanguine took it all in their stride realising that what would be would be.
The atmosphere in the GAA club was electric and filled with excitement as every little corner became a changing space and in the middle of all of this Stevie Rice had set up a stall and had created a monopoly on udderrmint – an essential for the discerning runner! With space at a premium, one team had pre-booked the VIP changing facilities in Ned McCartan’s front room. Here the gracious, ebullient and effervescent host provided valet parking, bespoke carb-rich pre-race food, handed out warm fluffy towels and proffered words of wisdom and encouragement. The 5* package was completed with optional dog therapy – petting Socks!!!

The 750 entries were snapped up in a few weeks, such is the popularity of this event among the NI running fraternity. Running in pairs is far from commonplace in what is largely an individual sport and this certainly brings a welcome new dimension in that you are only as good as your partner and an ill-conceived or sentimental choice could see you standing waiting at the top of a hill, the bottom of a hill or at the finish. The secret lies in getting the right partner; one you know you can work with and whose running skills complement your own – a lesson that has still to be learned by a number of this year’s participants.

While the event is a great opportunity to dress up, socialise and enjoy the wonderful scenery that Castlewellan has to offer, the racing at the sharp end of the field is seriously fierce. From the moment they were set on their way at the bottom of the Circular Road, the cream rose to the top as the leading teams thundered their way through the town at breakneck speed. Getting good road position at the front is essential for the leading men and women. In 2018, Newcastle’s Lynch and Hanna were clear winners with a minute and a half to spare over Johnston and Scott of Mourne Runners, with McMullan and Stephens from the host club a further 30 seconds back in third. These three teams were paired once again, but had to settle for second, third and fifth respectively. With Hanna in the form of his life and regularly representing Ireland in the hills and Lynch coming off a superb 31 minute 10k at the Seeley, they were the in-form team and pre-race favourites.

However, favourites do not always win and on this occasion it was Aaron McGrady from East Down and his partner Andrew Barrington, originally from Oban in Scotland (known to us from competing well in the Spelga Skyline in recent years) who emerged victorious. The pair who run and race together for Victoria Park Harriers in London were among a group of leaders along the Crow Road. As the course rose steeply after the Moorish Tower, the pair was second behind Lynch and Hanna as they hurtled through the fields towards the Bannanstown Road. As was the case in 2004, the climb over the Playrock Hill would prove decisive and the eventual winners managed to pull away and open a winning lead. However, McGrady admits that once they hit the front, they had to work very hard over the last three miles as they knew the quality of the team chasing them. When asked about the course, the winner said that it was very different to previous years, was far less muddy than anticipated and despite the steep hills offered great opportunities for hard fast running. Overall, he considered it to be a well-planned and carefully balanced route. McKinstry was always in contention, but his partner suffered terribly and put paid to their chances of the win – they would finish 4th overall.

Beechmount Harriers claimed the Ladies’ team prize with Sarah Laverty and Catherine Diver finishing in an excellent 29th place overall – all that training up the hill in Falls Park paid off!!! They were joined on the podium by Hannah Somani and Georgina Wiley (60th overall) and Amanda Perry and Denise Logue (66th overall).

In the mixed category there was a great win for Shalene McMurray and David McNeilly who were 13th overall and comfortably clear of their nearest challengers and club mates Mari Troeng and Frank Cunningham. Karen Wilton and Andrew Wills of Jog Lisburn completed the mixed team podium.

There were male, female and mixed category winners dotted throughout the field and these are highlighted in the results file available to DOWNLOAD HERE. Well done to everyone who won a prize.

Some of the fancy dress was simply amazing and added greatly to the sense of fun that is central to this race. Special mention to the Power family who once again dressed to impress and the three sheep bleated their way around the course under the ever watchful eye of Bo Peep, the Newry AC crew who were came as the cast of ‘I’m a Celebrity’, but regrettably failed to get out of there and had to complete all 9 miles and the Grant Family and their friends who looked ‘Cracking’ for the Cracker. Costumes came in all shapes and sizes with superheroes galore and even the odd beach ball shoved up a t-shirt for maximum effect.

Before we draw the curtain on this event there are some necessary closing remarks. Firstly we have to mention some of those who were ‘pale faced’ as they crossed the finish line. Among this number were Connaire McVeigh, his brother Brian McVeigh, Noel ‘Wonderwall’ Gallagher (no shocks there – well done to Sean Russell who carried him over the finish line!), Dee Murray (who fell foul of the Butcher’s knife) and Patrick Higgins who it would seem invented a new shade of grey. While all of these are notable and honourable mentions, there can only be on winner of such a prestigious accolade. The worthy recipient is none other than Dominic ‘Mad Dog’ McGreevey, who by his own admission was ‘clean bursted’ by evergreen Jim Brown before they even left the show field. Whilst cogitating the next day with McVeigh, he noted that there was a distinct lack of climbing in the opening mile which considerably reduced his chances of the overall win!!! Of course all of this is pure conjecture, passed on to me by others who were better placed to judge. As these pale faced warriors finished, I was probably getting a drink at Stephen McMullan’s pop-up tavern in Leitrim!

The day was a great success due to the hard work and planning that took place. Course Designer McCrickard would like to thank his incredible team that spent the best park of 2 days marking – Francie McAlinden, Audey McVeigh (who in an unusual shift from the norm said he loved the course!!!!), Aidan Brown (who also jogged it on race morning in an hour as a test!!!) and Donal Ward. Thanks also to the entry management and registration team who did so much work in creating and continually updating and modifying the team – no small task, the marshals from our own club and neighbouring clubs, the lead cyclists from Shimna Wheelers and Kilmegan CC, the motorbike riders, Robert and Paddy, the finish team and the presentation party – too many to name individually, but you all know who you are. In conclusion, the feedback from the 1400 that completed the course was amazingly positive and a great time was had by all. Rumour has it that the Prophet was observed entering the park this morning with a bill hook and a bow saw – preparations must be underway for 2020. 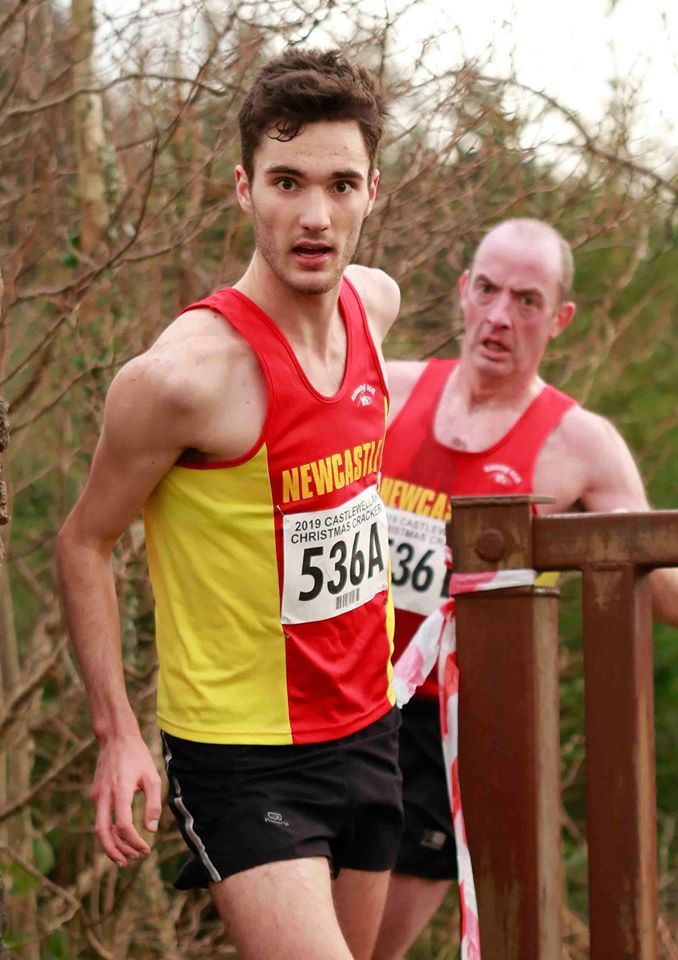 The Young Bull and the Very Tired Bull!