After trips to the expo the fearsome foursome of Murtagh, Troeng, Cunningham and Higgins travelled to the Hasenheide Parkrun on Saturday morning all recording times under 25 minutes- and the slowest 5k times of the weekend.

After last years pb of 2:36:40 in Berlin, Higgins wanted to try and break the 2:35 barrier. Also representing Newcastle and District AC Thomas O’Gorman fresh from his victory at the Armagh marathon 5 weeks earlier was attempting to break the 2:50 barrier. Having broken the three hours for the first time last autumn, Cunningham and Troeng (2:57:07 and 2:59:18) went to the line with the intention of going for it and taking a large chunk of their pb’s. Murtagh (2:59:11) after another summer representing Ireland in Mountain Running had returned to the tarmac with the intention of another sub three run.

They went out hard

Higgins went out harder than he had planned and went through the first 5k in 18:01 with Willowfield’s Neill Weir. O’Gorman followed in a speedy 20:09. Cunningham was next in 20:26, Troeng in 20:30, Murtagh in 21:12. After they passed 8km roars could be heard from chief supporter Carmel McGrady who had been staking out. Carmel had attempted to bring her banner for the Queen of Drumaroad, unfortunately it didn’t adhere to the the oversize baggage policy of Michael O’Leary.

Higgins and Weir battled in the wind finding themselves for large parts in no mans land before eventually bridging the gap up to a group around 15k. O’Gorman was consistent with only 23 seconds between his fastest and slowest splits over the first half.  Whilst it may look from the splits that Cunningham and Troeng were together, passing within 20 seconds of each other at 10,15 and 20k, given the three runners were all sensibly running their own races.

Running through half way in 75:51 Higgins now had taken 99 seconds off his half marathon pb. O’Gorman was on the money with a 85:09. The Burrenreagh Bachelor followed in 87:13 and Troeng in 87:27 perfectly on target for a sub 2:55. Murtagh came through in 89:27 in a display of total discipline.

Meanwhile back in Niki’s kitchen cafe there were plenty speculating over breakfast. Paul Rodgers was declaring that anyone who had ever asked him for advice about a marathon had broken the magical three hour barrier. Carson was advocating the use of beetroot juice for a strong finish.

When the going gets tough…

Whilst Berlin is renown for being a flat fast course, the course gradually climbs from 20-30k. Having lost time on the second half of the climb last year Higgins pushed on at 25km putting all the runs up Altandue to use. In retrospect kicking 17k from home Higgins later declared not to be his smartest idea and he slowed over the last 5k. O’Gorman followed keeping all his splits even to the finish.

Cunningham struggled just before the top of the hill at 28k and hit the only wall left in Berlin. Troeng managed to keep the pace up to after the 35km mark before slowing slightly over the last few kilometres. Meanwhile Murtagh was still incredibly disciplined and continued on with total courage.

…the tough get going!

Running 45 seconds slower in the second half Higgins recorded a pb by 4 mins and 13 seconds for a finish time of 2:32:27. O’Gorman followed with an impressive negative split of 9 seconds sneaking under the 2:50 barrier by the smallest of margins of only 1 second for a time of 2:49:59.

No regretsHaving went out hard Troeng was third to cross the line in a time of 2:58:25 taking 53 seconds of her pb from last year in Berlin. Whilst slightly disappointed with her time Troeng should be proud she went for it. She showed strength and maturity to deliver another sub three time and there is no doubt she has the potential to break 2:55 the next time she toes the line in a marathon.

Sinéad Murtagh was the next NAC runner to arrive at Branderberg Gate. Having relied on her watch average of 6:47 per mile and having been in front of the official pacers she had an agonising wait for her chip time which came up as 3:00:03. This was extremely hard on the talented Drumaroad Damsel who didn’t deserve the distressing time she got.

Showing how much he has came on in the last year despite slowing, Cunningham fought on gallantly to the finish for a time of 3:01:05 a time most people would be proud of. Cunningham should be especially proud to have blown up and still do such a fast time. Proof that the long Sunday miles have paid off. There is no doubt the Burrenreagh Bachelor will learn from the experience and build on this for his annual pilgrimage to Dublin in four weeks time with Higgins once they call out to Drumaroad for caramel squares.

On a final note the runners wish to express their sincere gratitude to Carmel McGrady for ensuring that their weekend was never boring. 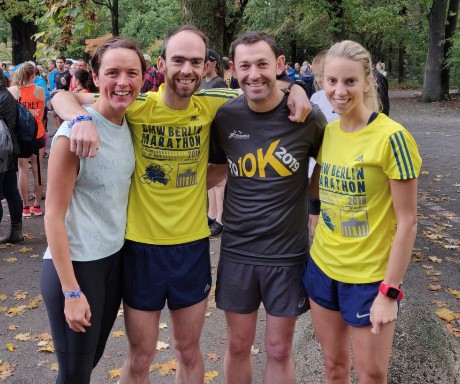 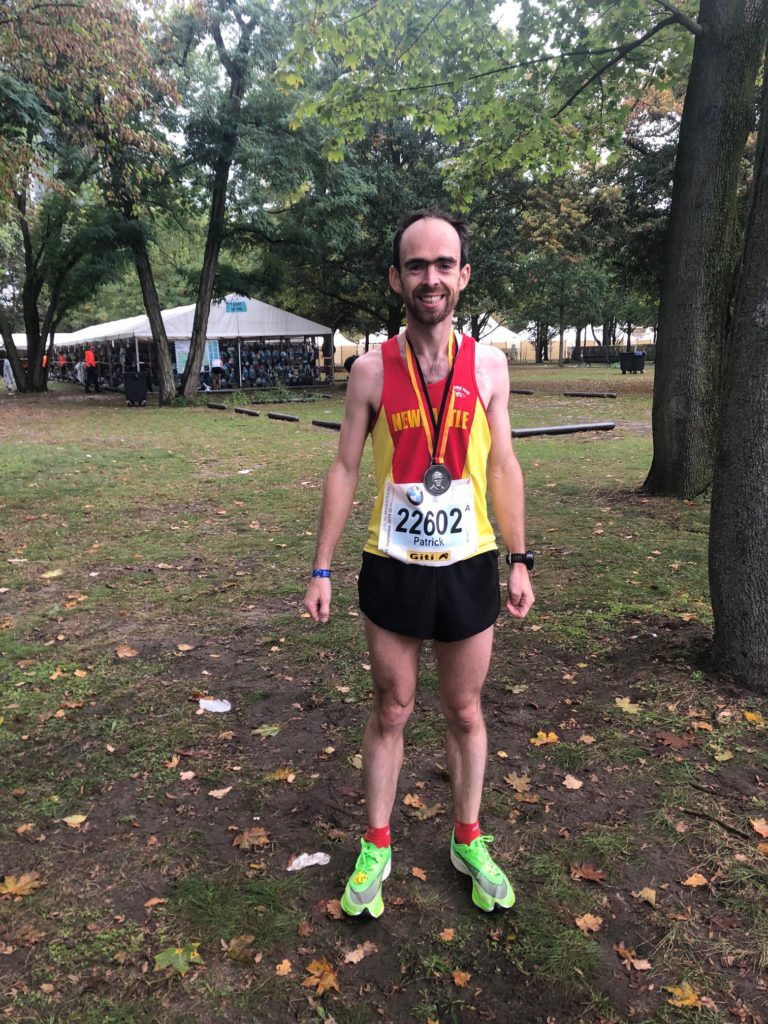 A delighted Higgins at the finish