By the Head Chef

Friday evening saw the annual Born 2 Run Sea 2 Sky 5k and 10k races in Newcastle with numerous Newcastle AC members taking part. With the 10k starting opposite O’Hares Bar and Lounges and the 5k starting in Donard Forest the competitors were forced toendure some inclement weather. As the thunder roared and the lightening struck both races started simultaneously at 7.32pm. 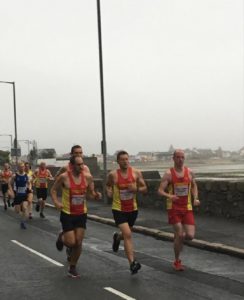 The MoM of the race award had to be awarded to James King with his 4th place finish. James has been putting in the hard yards of late and claims his recent weekend runs around the Brontelands, Backaderry and Dollies Brae have stood him in good stead. When asked for comment coach Higgins was not prepared to get into too much detail; however he did confirm he would be treating James to a large Brennan’s ice cream on Sunday morning following his impressive Sea2Sky performance.

The return of the goat 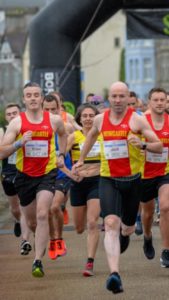 Local hotelier Jack O’Hare fresh from a warm weather training camp in Galway made a surprised return to racing for 2019 and didn’t disappoint his many followers across the course. Making his move on the accent to Shepard’s Lodge Jack guided a second chasing group of Newcastle athletes to the finish. Finishing 16th overall in 39.46 the local hotelier just held off Gary McEvoy (17th overall in 39.47) and the apprentice Brian McVeigh (18th overall in 39.48) on the promenade finish. In the male category other notable Newcastle participants included Noel ‘ww’ Gallagher (25th overall in 41.56), Frankie McGivern (54th overall in 44.33) and Peter McStravock (60th overall in 44.55). 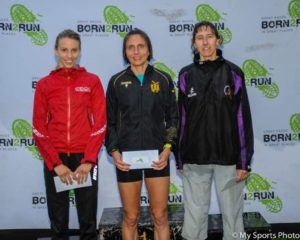 Mari Troeng fresh from her Ford 5k podium finish made it another with a 3rd place finish in the ladies category. Mari was closely pipped to second by the impressive Karen Wilton with Mari finishing 22nd overall in 40.42. Other notable Newcastle female participants included Nicola Mathers (158th overall in 50.10), Rita Devlin (180th overall is 51.05) and Nicky McKeag (259th overall in 54.15).

Well done to all who took part and thanks to the Born2Run team for another great event.