Luke’s Nowhere to be Seen

Donard, Commedagh, Bernagh, Binnian… everyone know’s them, the higher peaks in the beautiful mountain range that is the Mournes. A place that all who hail from south east Down are proud to call home. There are loads more minors peaks and hillocks in the 100 square miles that are great fun to explore. So after decades of Hill & Dales the Broken Wing Commander decided during the last winter that he would dream up a new route for one of the 2019 Series.

First there was the venue – Meelmore Lodge. If you haven’t been to Meelmore Lodge lately, then go check it out. A significant amount of investment has been done there and there’s great parking facilities and easy access to the Ulster Way under the shadow of Meelmore (Meelmore, really? Maybe that’s why it’s called Meelmore Lodge 🤷‍♂️). There’s accommodation there, including pods and plenty of camping spaces – great for a night out.

The race exited the campsite with the organisers issuing strict instructions for runners not to cross walls or fences except through an open gate where a marshall would be there to direct them. Wet tops were the order of the day, for while it was mild and dry there were a few ominous grey clouds around and once up near to 2,000 feet the climate conditions can be much more challenging.

By the way, one of the race directors (there’s so much to organising a Hill & Dale race these days that there are two directors for each race) decided it would be wise to recce the course earlier in the week. So on Monday evening meeting at the above-mentioned stunning Meelmore Lodge he gathered with a few so-called running mates. They set off, quickly deciding to start the race on the green paddock below the Lodge (sending runners up a steep straight stoney lane to make sure they would be warmed up properly before hitting the open mountain!).

The decision to start there had far-reaching consequences for just adjacent to the chosen start location, come Thursday at 7pm, a camping couple decided to cook dinner on a makeshift stove. They must have been planning a quiet romantic evening with stunning views? However, just as they sat down, Frank Morgan, the perennial starter (and finishing funnel constructor) arrived with his flags and tape. He was followed soon after by hundreds of runners and spectators gathering beside the lucky campers. So no need for them to put on the TV, they had all the live entertainment they needed.

Back to Monday evening and the ‘course recce crew’ followed the Trassey river, crossing it before the hard climb up Slievenaglough. They then followed the green shoot up to the first check point at its summit. After that it was the technical descent down and up to the summit of lesser-known Lukes’ Mountain and from there making their way home. Mountain leader and rescue stalwart, Ian McCracken fell not once but twice going over on his ankle badly. Thankfully no need for the mountain rescue as the Prophet was there to guide him home safely. Poor Ian, after all the winter preparation there would be no Thursday evening race for him. 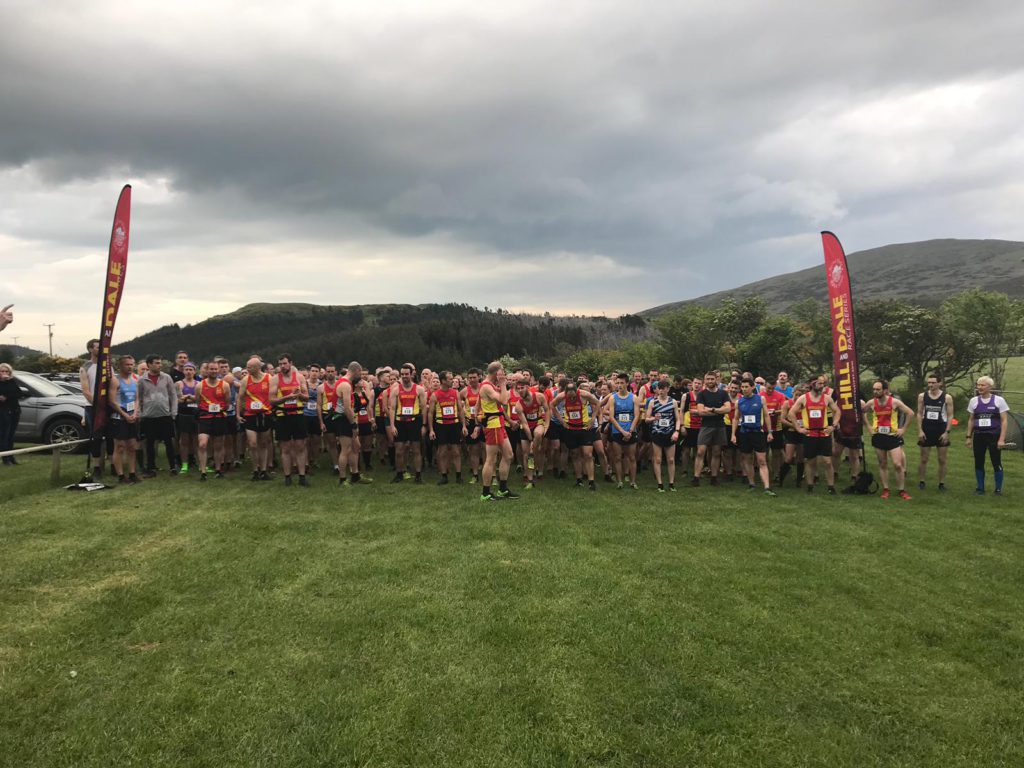 As the runners milled around (mountain types are not well-known for an extensive warm-up), Pete Grant (who was surprisingly wearing his club vest for a change) must have had a category win on his mind. He moaned and groaned about the long sharp start, delaying the time before he could get his shoes properly mucky. Later on, however, that would be the least of his worries as for some reason he decided to leave his car key somewhere out on the open mountain at a grid reference that to the present time only God knows!!!!

As Frank’s whistle was blown at 7:28:45 (a sign of efficient race direction?) the 221 runners charged off up the stoney track and onto the open mountain. The route, mostly on sheep trods, took them directly onto the craggy summit of Slievenaglough. Slievenaglough is part of the Mourne Wall route – a mountain that really meant something this evening rather than just being an anonymous part of the route from the Hare’s Gap to Commedagh. Positively, pretty much everyone successfully reached the cut-off point of 18 minutes for the first mile that included around 800 feet of climbing.

The host club’s Seamy Lynch had established a comfortable lead early in the race, clear of his club mate Mark Stephens. Newry AC’s Esther Dickson was also comfortable in the woman’s race, ahead of Karen Wilton from Lisburn and Mourne runner Sarah Graham. It should have been plain sailing for everyone, but as often happens, the low cloud rolled in onto the ridge between Slievenaglough and Luke’s and the summit of Luke’s disappeared from view. We are still not sure that everyone made it there, but what is certain is that everyone made it back. 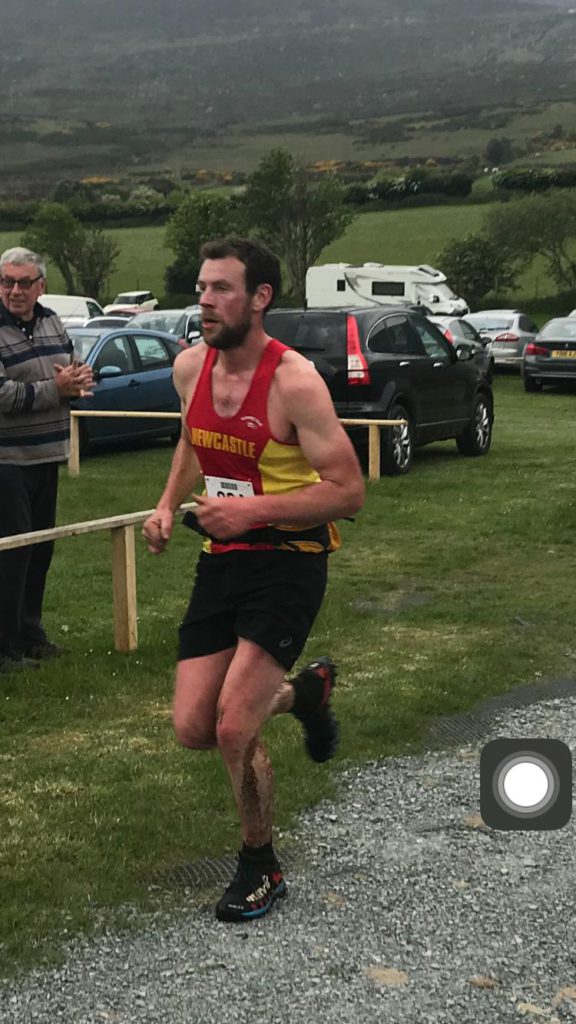 Legal counsel Higgins lives life in the fast lane, balancing defending the indefensible in one court room or another with life on the farm and, allegedly, a Viking love nest in Tullybrannigan. If there’s controversy in a sport not known for its controversy, Higgins perhaps will not be too far away – gamekeeper turned poacher? This evening, on the way home he chose his own line and clearly there had been some pillow talk, for she did too – slightly different but both probably crossed the moral line, but probably not far enough to be eligible for a criminal conviction? His talk of bringing his finely honed orienteering skills to the table did not convince the Broken Wing Commander but despite his protests supported strongly by the Hen, the directors have no appetite for years in court ending in the European Court of Justice, no doubt, so the results stand. 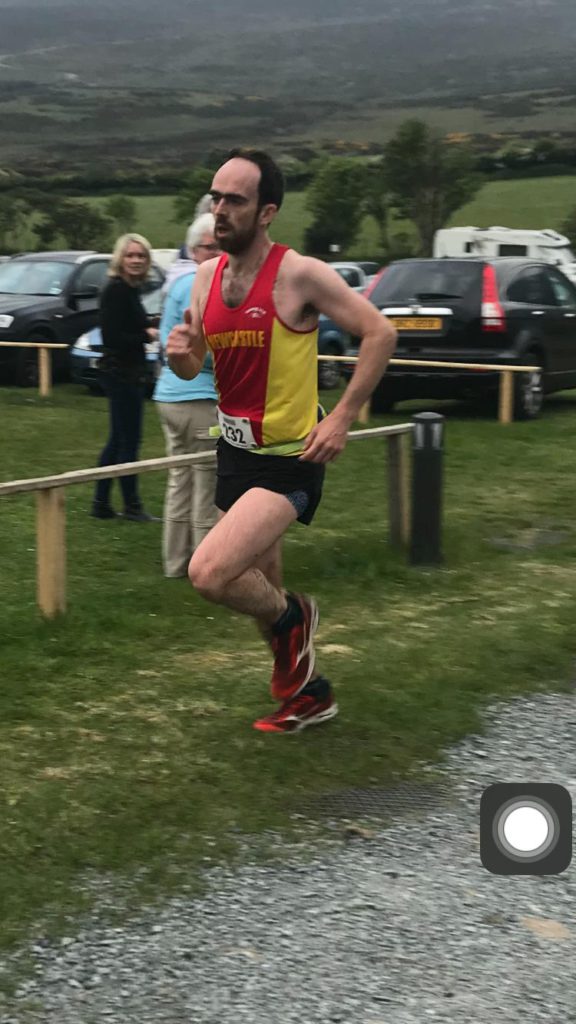 A fine run from Ballydrain Junior, Jared Martin to come home in 3rd – a big star for the future? Many of the runners remarked this was the best H&D course in years and it was great to freshen the Series up with a new route – food for thought for the organisers for 2020?

The Thanks & the Unashamed Self-Promotion

Many thanks to all at Meelmore Lodge for the use of their facilities in this beautiful location, the marshals, time keepers and people behind the scenes who keep the Series running smoothly each week. Also thanks to the “Avoca Hotel & Spa” on their excellent food and beverages (‘By Order of Jack O’Hare’)

Report from “The Hospitality Legend”