In 1978 Kate Bush was top of the charts with ‘Wuthering Heights’ and now again 44 years later her second no.1 with ‘Running Up That Hill.’ Stranger Things have happened…

Nevertheless two good numbers that a squad of hardy fell runners can relate to. Sunday 19th June was the next NIMRA championship race, and it was the medium Flagstaff to Carlingford route, a linear 11 mile jaunt through the Cooley mountains with a good 3000ft elevation to take on.

The first dibbing point was the steps up onto the bus which dropped the runners at a lonely path on the Armagh/Louth border, to head straight into the climb for Anglesey Mountain, before traversing boggy ground to Clermont on the Ravensdale side. The next 5 mile or so was all fairly runnable taking in the next 3 checkpoints, firstly the mast on Clermont Carn/Black Mountain, a nice path towards Carnavaddy, before dropping down to the Windy Gap at the Long Woman’s Grave. A quick sup of water here and then route choice becomes random and sporadic towards the last checkpoint on the high point of County Louth, Slieve Foye, steeply overlooking the finish down in Carlingford. END_OF_DOCUMENT_TOKEN_TO_BE_REPLACED

I think a bit of over confidence and inexperience came into play right from the start.  Immediately we all started racing from the off.  After I led for the 1st 10k the lead proceeded to change numerous times until around 30km then things calmed a bit more.

Due to the nature of the event it’s a marathon out and back.  This means crossing paths again and some more position changes but then it all really settled down and the field spread out.  Most of the return leg I was on my own and couldn’t even see another competitor.

I paid the price for the early fast pace and had to push myself mentally to keep running all the way back, with regular checks over my shoulder for any competition.  My legs were screaming that entire second half but thankfully no cramping.

Amazingly my body survived, and I came in under 10 hours, even managing 3rd place with 4th place over 20 mins behind me.  For only my second ever ultra I was absolutely over the moon! 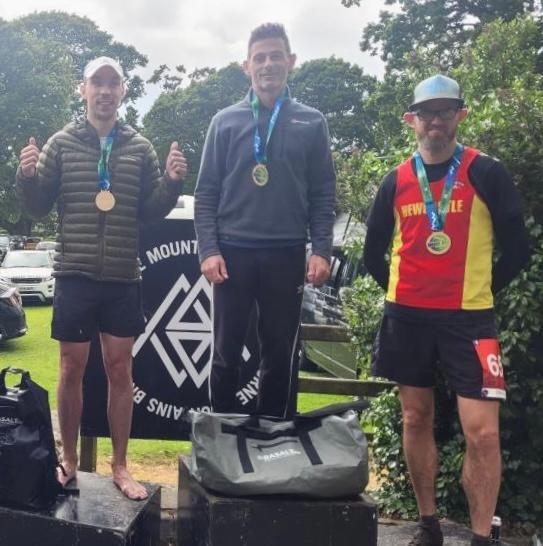 Newcastle AC’s, Mark King along with Ricky Hanna, David Bell & Clarke Browne (all Mourne Runners) travelled to Keswick on Saturday 28th May, to take part in one of the Lake District’s classic fell races – “Helvellyn and the Dodds”. 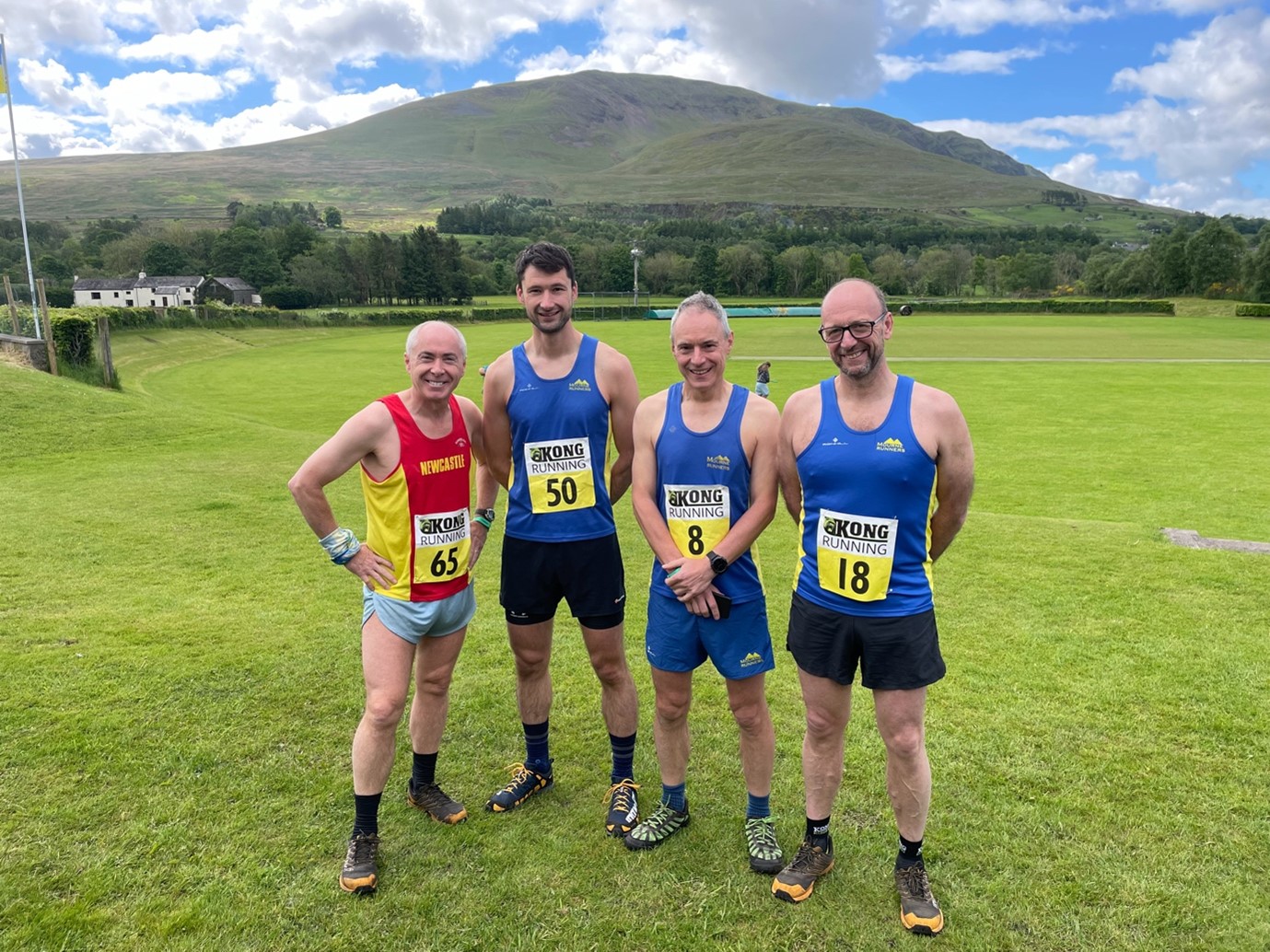 Newcastle AC’s Mark King along with the Mourne Runners trio of Ricky Hanna, David Bell & Clarke Browne before the start of the race

The race starts at the stunning grounds of Keswick Cricket Club. This location is significant in so far as it marks the end of Leg 1 & start of Leg 2 of the “Bob Graham Round”. The race includes several of the BGR peaks and has an official distance of 14.9 miles & 4,386ft of elevation over an out & back course.

This years edition had 135 competitors and with firm, dry ground, low wind and great visibility it had all the components for a great days racing.

After a fast half mile start along a narrow tarmac road the course enters the initial climb to the summit of “Clough Head”. This climb covers almost 2,000 ft and was a shock to the system! From there the race is over a well-defined grassy track – picking off “Little Dodd” & “Great Dodd” along the way. This is relatively flat & fast section of the course and whilst navigating the criss-cross of ramblers tracks would be difficult on a misty day there was no such problem – blue skies made “following the leader” easy. END_OF_DOCUMENT_TOKEN_TO_BE_REPLACED

Newcastle AC at the NIMRA Championship

Saturday 21st May was the staging of NIMRA’s first long category race of the 2022 championship and the fourth out of nine so far this year. Hosted by BARF, the Annalong Horseshoe race has been a permanent fixture over the years and takes in the loop of the six dominant peaks overlooking the Annalong Valley, namely Chimney Rock, Donard, Commedagh, Cove, Lamagan and lastly Binnian’s North Tor, with the start & finish at Carrick Little. With over 20km in distance and at least 2000m of ascent ahead, this would be beyond the limits of quite a few, however 3 fellas who took it on last year were back for similar punishment! Luckily the weather was on their side this time with a largely clear & calm day, with cloud cover limited to the summit tops, and this gave the runners a refreshing cooldown before going back to the warmer climate on the cols as the day heated up.

Pete Grant’s 2021 time was 3hrs 15mins and at present is on great form. A 20th place finish on Slieve Donard last Saturday, just 25 seconds shy of taking his age category, was followed by a fantastic run of his local Hill & Dale at Rocky just 2 days before, coming 16th overall and 1st in the age category. Tired legs were not to prove any bother, and in trying to reel in East Downs Niall Gibney & Newry’s Paul Le Blanc to the finish, Pete came in 15th place with an overall time of 2hrs 54mins, a good 20 minutes off last year. A great week’s work in the bank and that didn’t stop him getting out for a pedal on the bike on Sunday morning either! END_OF_DOCUMENT_TOKEN_TO_BE_REPLACED

Running requires so much effort. Why can’t it be easy?

You enter your first 5k, but no one tells you about having to put in so many training runs, amounting in much greater collective distance than the actual event. But we do it because its claimed to make it easier. Then we push it a bit further, going for a 10k and so on. Join a club or make running buddies and it soon spirals out of control. Next thing you know the rest of your family and “normal” friends label you a nutter.

Guess this is what happened to me, though my brother is as much to blame as any running buddies. His progression to ultras has rubbed off and a few years ago, after working my way up to half marathon races I decided to skip the marathon stage and just go for the ultra. It sounded better in my head and sure if Phil can do them why can’t I. Nothing to do with brotherly rivalry, honest.

And sure if you’re going for an ultra why not do the double marathon, and through the Mournes too for extra fun. So a few years ago I entered and completed the 26 Extreme 52 mile Mourne Way Ultra. END_OF_DOCUMENT_TOKEN_TO_BE_REPLACED

Congratulations to two Newcastle AC athletes selected to compete at the European Off-Road Running Championship taking place from 1st-3rd July on the island of La Palma in Gran Canaria.

Tom Crudgington travelled to the Irish Trials in Wicklow, where he won selection to the U20 Team, by a winning margin of 50 seconds. Tom will be joined by three fellow N.I.& Ulster U20 athletes, Sean McGinley, Ryan Smith and Amy Greene, Amy having also won the Female U20 race.

Zak Hanna was pre-selected, based on last year’s International performances and current form.

Zak Hanna will run as the sole Irish runner in the Senior Men’s uphill only race (8.8km, 997m elevation gain), whilst Tom will run in the Junior Men’s race as part of a four-man team.

The Championships also include the classic 12km up & down mountain races as well as a 50km trail race, for both male and female runners with 25 countries and over 200 runners expected to arrive at the volcanic island to battle for the title of European Champion in their respective races. 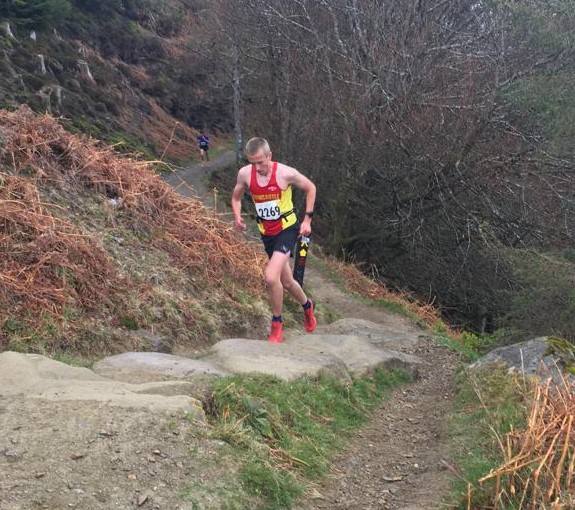 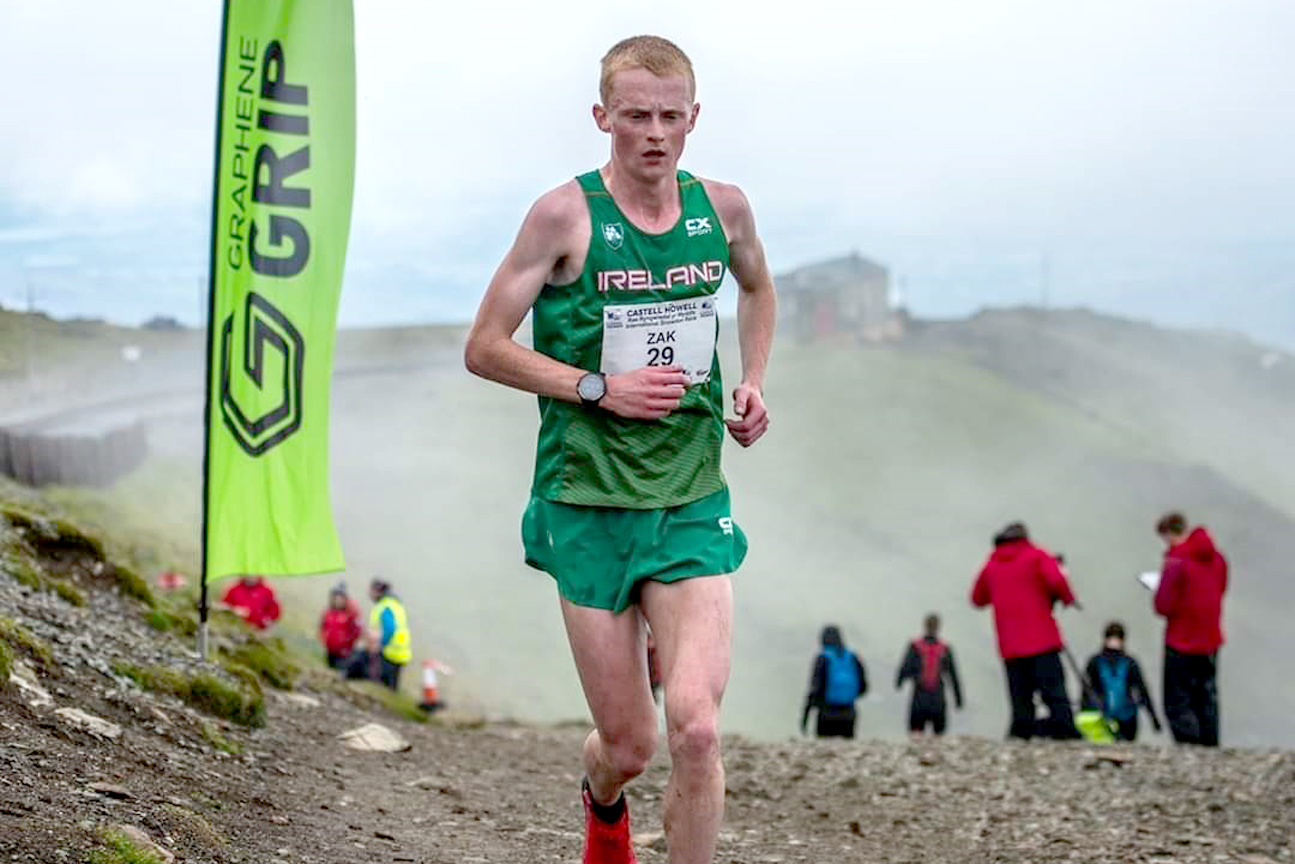