Last week saw the local and national press rightly applaud the efforts of Northern Ireland athletes who completed the Virgin London Marathon.  Amid all the celebration the unbelievable achievement of one man went wholly un-noticed.  Newcastle’s Mark Kendall had a PB of 2:51:15 prior to April 22nd.  He had trained stoically and lived a troglodyte existence in the months leading up to the event.  Such was the intensity of his training that several kilos were shed and he was in tip-top condition as the big day approached and he was duly rewarded with a wonderful performance where he recorded a highly impressive 2:43:51, beating his previous best by well over 7 minutes and qualifying for a Championship Entry (only for those with a sub 2:45 time) for 2013.  This was a fitting finale to a wonderful weekend in the capital. 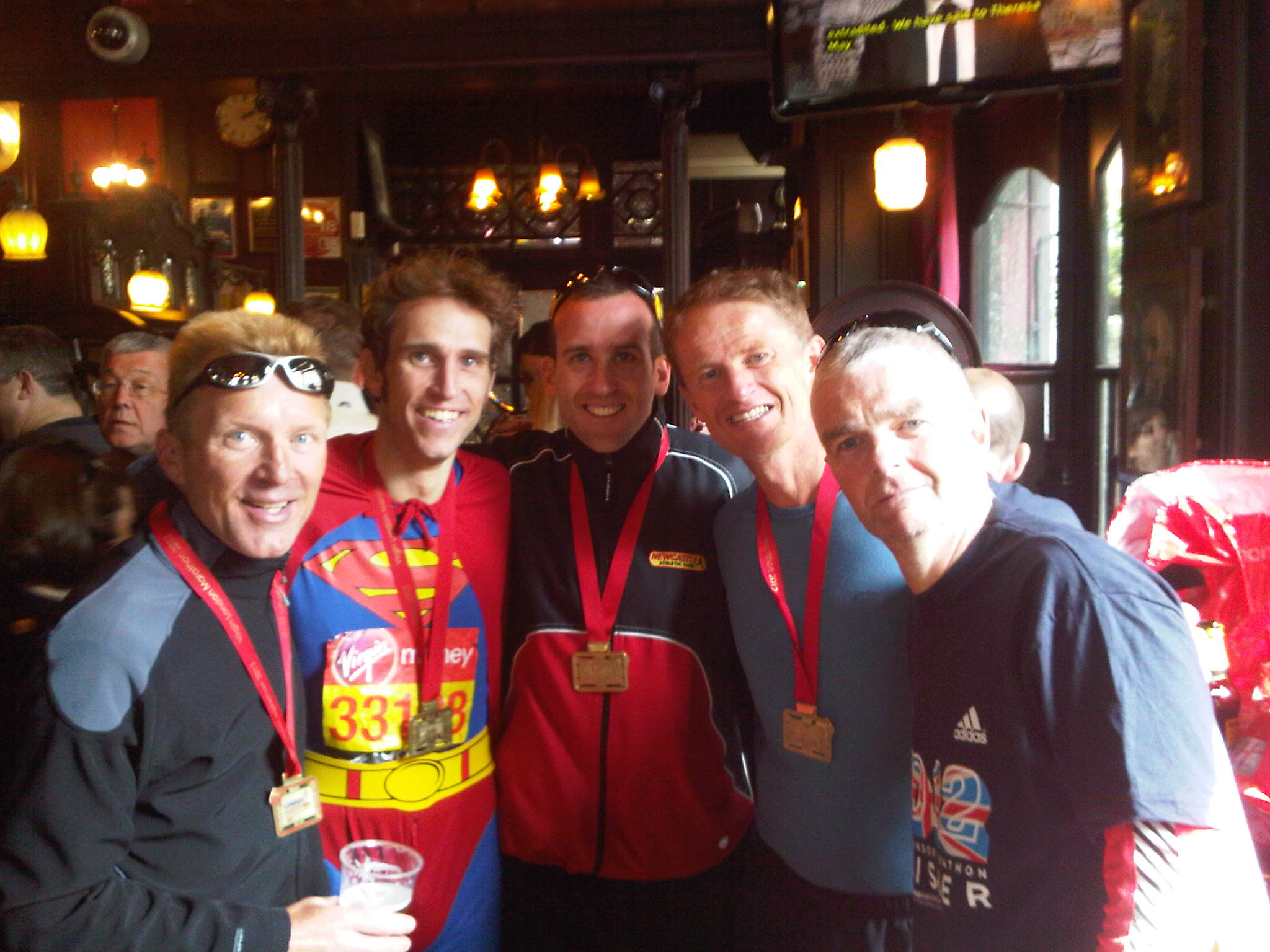 Where is the Sofitel?

Mark and I travelled with our new best friend, Norman Smyth (who recorded an impressive 3:23) from Banbridge to London on Friday evening, where we were met at Gatwick by Big Alan Strachan. Our first challenge was finding the Sofitel Hotel, which took almost as long completing the marathon.  The next challenge was finding our host at the drop off zone.  Undoubtedly we looked like tourists from the bog as we dragged our belongings one way then the other, rather than the much travelled jet-setters that we claim to be!  After our first feed of pasta in leafy Surrey we all had a restful night.  Our preparations continued in earnest on Saturday morning with a gentle (more gentle for some than others!) amble around the world famous Walton Heath Golf Course.  This was followed by a visit to Box Hill, which will be the setting for the cycling road race at the 2012 London Olympics.  While a multitude of cyclists struggled to varying degrees to reach the summit we sipped our coffee, decided which of the many cakes purchased we liked best (the treacle tart was unanimously declared the tastiest piece of confectionary) and contemplated what lay ahead.  A relaxing afternoon, exploring the finer points of Countdown and taking inspiration from Former NI international athlete Mike Bull, was followed by even more pasta as the realisation of the challenge of what lay became a more imminent reality.

Too late for cereal lads!

By the time my alarm forced me out of bed Kendall was showered, dressed and tucking into a bowl of porridge that would have left Jim Patterson marvelling.  I promised not to mention the fact that he used all of the milk and left the rest of us to make do with toast; such is the single-minded determination of the serious athlete!  And so it was time to head for the train that would lead us to our destiny.  The atmosphere at the start was magnificent as the multitudes queued for the toilet, nibbled on energy bars and imbibed their electrolyte and carbohydrate rich drinks.  As 9:45 am approached the outer layers were discarded as we corralled into our starting pens full of hope and anticipation (Damien – I failed to spot the t-shirt you left there in 2004 – hopefully someone did pick up and got a bit f wear out of it –at last you can rest!).

Kendall was off like the proverbial Kenyan and never lost his rhythm on the way to a stunning performance that saw him take 307th in a race attracting over 37,000 athletes.  Strachan despite a recurring foot problem was his usual steady self and knocked out another fantastic time to add to his already impressive CV.  As for myself, it was sadly a case of ‘you get out what you put in’ and while pleased to finish I was increasingly struggling (bit of an understatement!) as the miles passed by.  The marathon is totally unforgiving and must be respected for the challenge that it is; a fact I have promised to bear in mind for the future.

London lives up to its big race reputation

The atmosphere along the course was unbelievable and the best I have witnessed in my experience to date.  Spectators were allowed at Cutty Sark this year and at this point the noise from the appreciative audience was almost deafening.  The highlight for me was at the 14 mile marker witnessing the elite men come past on the opposite side of the road at their 22 mile marker.  Despite my growing weariness, I had to muster the energy to applaud their performance as they strode effortlessly towards the finish.  Television does little justice to the speed at which these elite men and women travel.  As the finish approached and the legs reached the point of no return, I was heartened and inspired by the cheers and good wishes of the crowds who were willing us all to the line and clapping relentlessly in appreciation at the journey we had travelled.

Even Superman goes to the pub

Having received my medal and hug form the kind lady at the finish, it was time to go to the repatriation area to meet my solemates(!)  With the improved tracking technology available this year most of Newcastle knew our results as soon as we did and I found several messages waiting for me as I retrieved my phone at the finish (some were kinder than others!).  At this point we adjourned to the Red Lion for hard earned refreshment.  We met Superman (he only beat me by half an hour!) and exchanged anecdotes with other athletes before bidding farewell to the capital clutching our red bags and smiling at the memory of a fantastic weekend.

Good luck to our club members taking part in the London Marathon tomorrow.
You can follow their progress with Live Tracking which gives 5km split times.

Their race numbers are: