Teer and Totten Team up to Terrifically Tame the Leitrim Record! 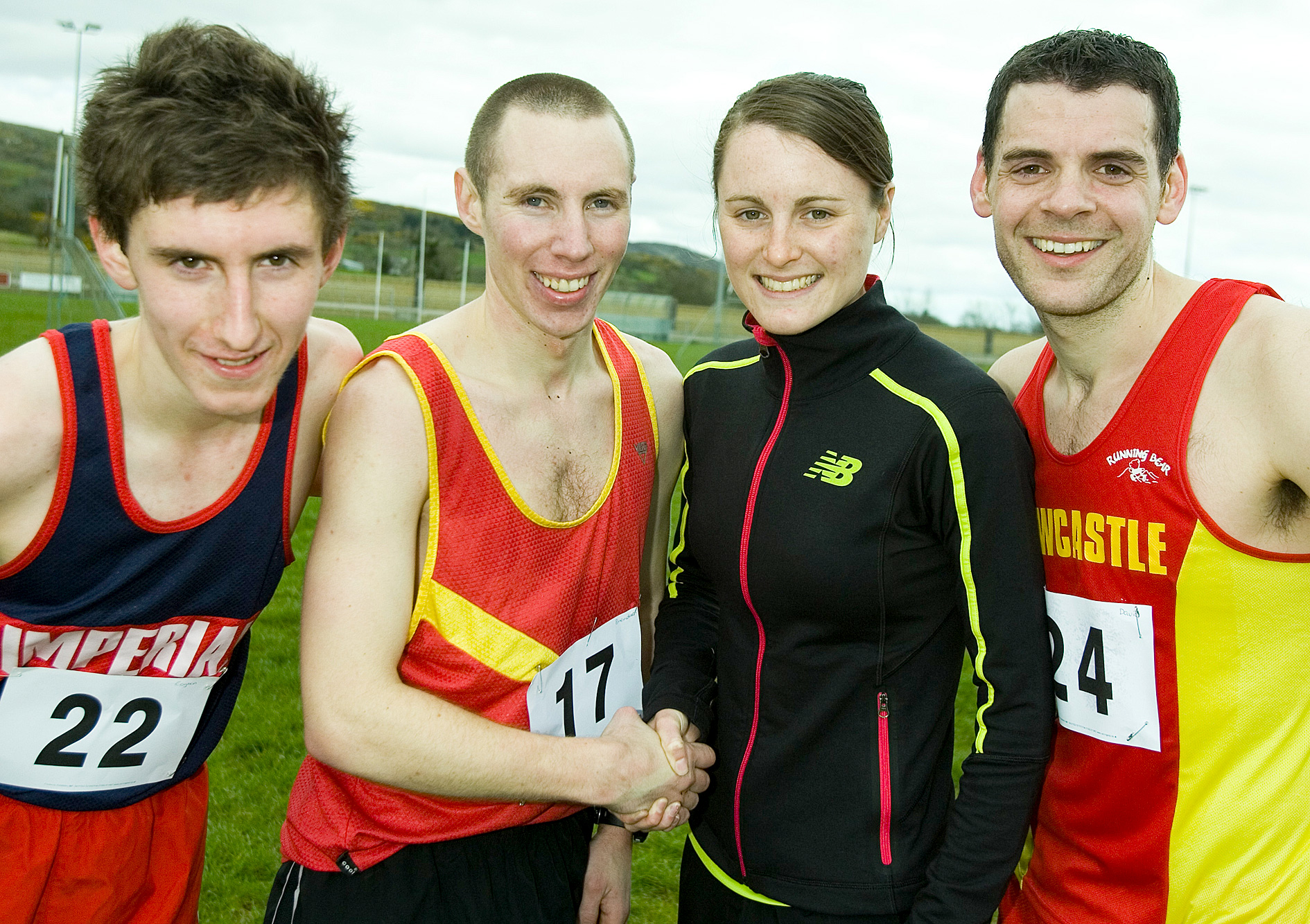 While some of the local runners are competing in events in far flung exotic locations, Newcastle AC Athletes have been supporting local races, organised by local sporting clubs. Following the great turn out at Castlewellan, 14 of our number competed in the Leitrim 5. This would have been higher still but for work commitments and some injuries and illnesses. However, as has been the case in recent weeks, our boys packed well, claiming 12 of the top 20 places. Well done to Eoghan Totten on an excellent second place in his first race on home soil in quite a while. The young London-based student made all the early running leading the eventual winner Brendan Teer for the first two miles. Teer’s experience was probably the decisive factor in the latter stages as he recorded an impressive 25:51 to set a new course record. Perhaps the best Newcastle performance came from John ‘Hen’ Kelly who recorded an impressive 31:13 on the back of absolutely no training – when he gets fit he will be unbeatable according to Newcastle AC Vice-Chairman Paul Watson. Luke McMullan found his way around the course to finish 4th and despite being a self-proclaimed better climber than O’Flaherty lost out to him on the undulating terrain from the Backaderry crossroads to the finish. Luke was less successful in finding his way home from the Saddle during the Sunday morning run. He failed to follow the newly laid path that leads directly to the forest and a search party (Kendall and McVeigh) had to be sent to rescue him. Education is clearly wasted on the young!!!

A number of the junior athletes participated in the 2 mile fun run and all worked hard on the undulating course as evidenced by their great times. Well done to everyone who participated.

While some had only a short 9 iron to travel to get to Leitrim others made the somewhat longer journey to Omagh to participate in one of the traditional pre marathon sharpeners. Bob Brown recorded 1:29: 53 while Paul Fegan was equally pleased with his time of 1:47:11. Well done to both.

Barry runs and writes Well(s)!
In readying himself for the task of preparing the first Hill and Dale report of the season, my esteemed colleague Barry Wells sent me a few words of reflection on the Donard Downhill Race which took place on the same day as both Leitrim and Omagh.
“On Saturday afternoon there was an alternative to the Leitrim road race. The adrenalin junkies amongst the running fraternity chose ‘The Slieve Donard Downhill’ fell race.
This, as it says on the tin, is a race from the summit of Slieve Donard to Donard Park by the route of your choice. This decent is 840m to sea level and a distance, depending on route-choice, of approximately 4.5k.
The temperature on the summit was down to 5 degrees so there was no time to hang around. Once the 23 runners had summited, the first runner was unleashed with the rest of the field was set off at 10 second intervals. This caused a bit of a problem at the finish as the organising committee hadn’t enough fingers between them to work out the results by times rather than finish position.
This gave plenty of time to compare race routes and battle scars. If there was a team prize for the latter, Murlough AC would have stormed to victory. Their 3 top finishers seemed to have taken the unconventional way of descending the rugged terrain by sliding, tripping and tumbling to the bottom. With cuts and grazes being flaunted to anyone who even glanced over in their direction, they were pococurante to their pain and proud of the battle scars they had collected en route (or off route in their case!). Many photographs were taken, but I guess they would be too gruesome for the Mourne Observer to publish!
First place in an excellent time of 15:56 was Johnny Steede, making the long trek form ‘Little Ballymena’ worthwhile. Second in a time of 16:44 was Newry City Runner’s Peter Grant who did very well considering he strayed from the most direct route. Newcastle’s very own Barry Wells was a very credible third (my words not his!) in 16:54. The only other Newcastle runner who wasn’t at Leitrim was Nathan McCombe who had a highly respectable time of 17:33.

The Ladies’ race was won by Diane Wilson in a new record time of 19:13. Second lady was Anne Sandford (22:49), while Megan Wilson was third (23.55). Thanks to all the BARF members for the organising of the race and the post-race Jaffa cakes. Maybe next year it’ll be Visounts or even better Taxis!”

Hill and Dale
For many their next race will be the opening Hill and Dale race in Castlewellan. Entries are now being taken online and athletes are encouraged to register in advance to save time on the evening. Athletes are asked to arrive on time and only park in the main car park.