As June came to a close and we look forward to what will hopefully be a wonderful summer of laughter and fun, the Newcastle AC Junior Squad reflected back on what has been a very eventful year, from our youngest to our oldest members.

Tentatively returning to training this year with a change of venue at the start of the year to facilitate the Covid-19 restrictions, the Junior Coaches set up camp every Monday Evening at the Flood Lit grounds of Donard Park instead of their staple venue of Shimna Integrated College. 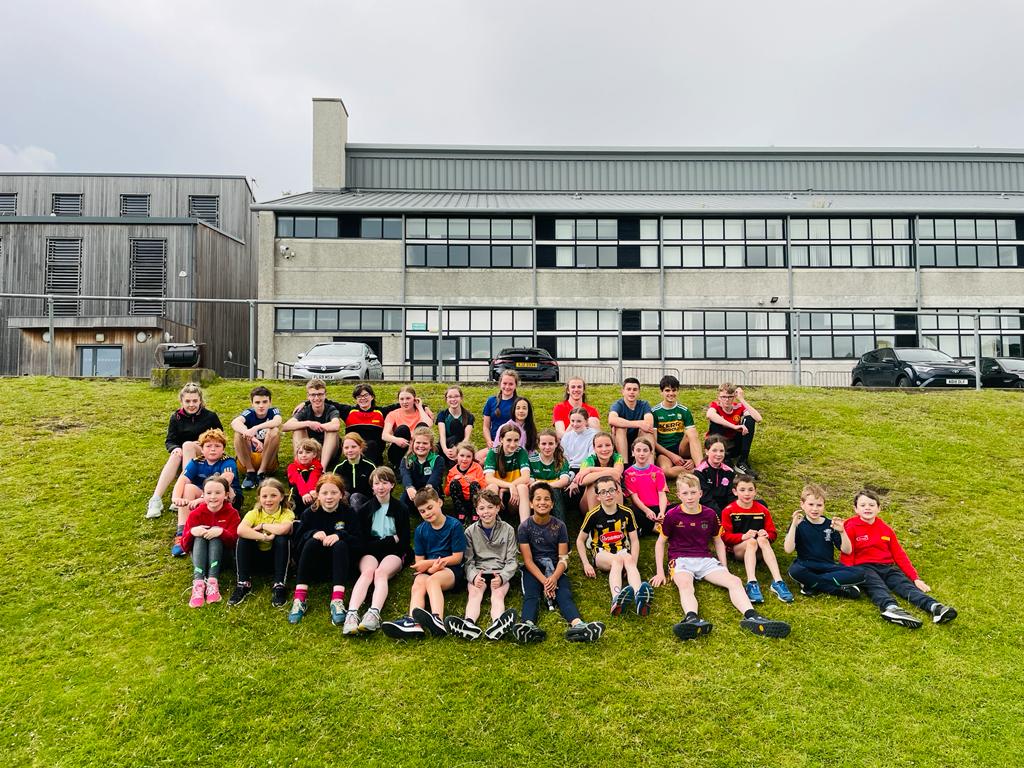 It was lovely to have some form of normality return to life and although the coaching team was always very cautious, our junior members relished the opportunity to get together with their friends and club mates, embracing each and every session. The Year 8 and over Saturday endurance training in Tollymore Forest rolled out again also under the watchful eye of Ian Brannigan.

The Junior training is broken up into three groups each week. Ian Bailey leads the Year 8 and over mountain runners. This year they have utilised every track, trail and pathway in every sort of weather up, down and along Donard Wood from the Granite Trail to Drinnahilly and as far up Donard you can go in 40minutes! This has without a doubt led to notable performances in competitions at home and as far away as Italy with both the girls and boys impressing in all events.

The next group consists of the Primary 7 and older, track and field group. Not everyone loves the mountains or wants to do the hills every week so they get the choice to take part in  short, sharp and fast interval sessions as well as getting the opportunity to develop their throwing and jumping fundamentals to develop their multi-event skills.  Then we have everyone’s favourite group – feisty, dedicated and always giving 110% each week is the younger juniors. Building their ABCs, agility, balance and coordination, through fun drills and games, the little legs are relentless.

This year, we have had success on the track, in the mountains, at Cross Country and some amazing progress at parkruns across NI.

Welcoming back the McGrady Financial Services Junior Cross Country Series, allowed for our juniors to compete not only against their peers from training but to test their capabilities and talents against other local junior squads.

The Newcastle AC Juniors didn’t disappoint across all three events, with many podium finishes across the full age range. There was plenty to celebrate after some hotly fought battles which went right to the line especially with the Year 8 boys category. From the littlest of strides of the P4s and under to the majestic long strides of our older members, the club was exceptionally proud of the achievements of every athlete who toed the line in Dromore, Delamont and Tollymore this year. 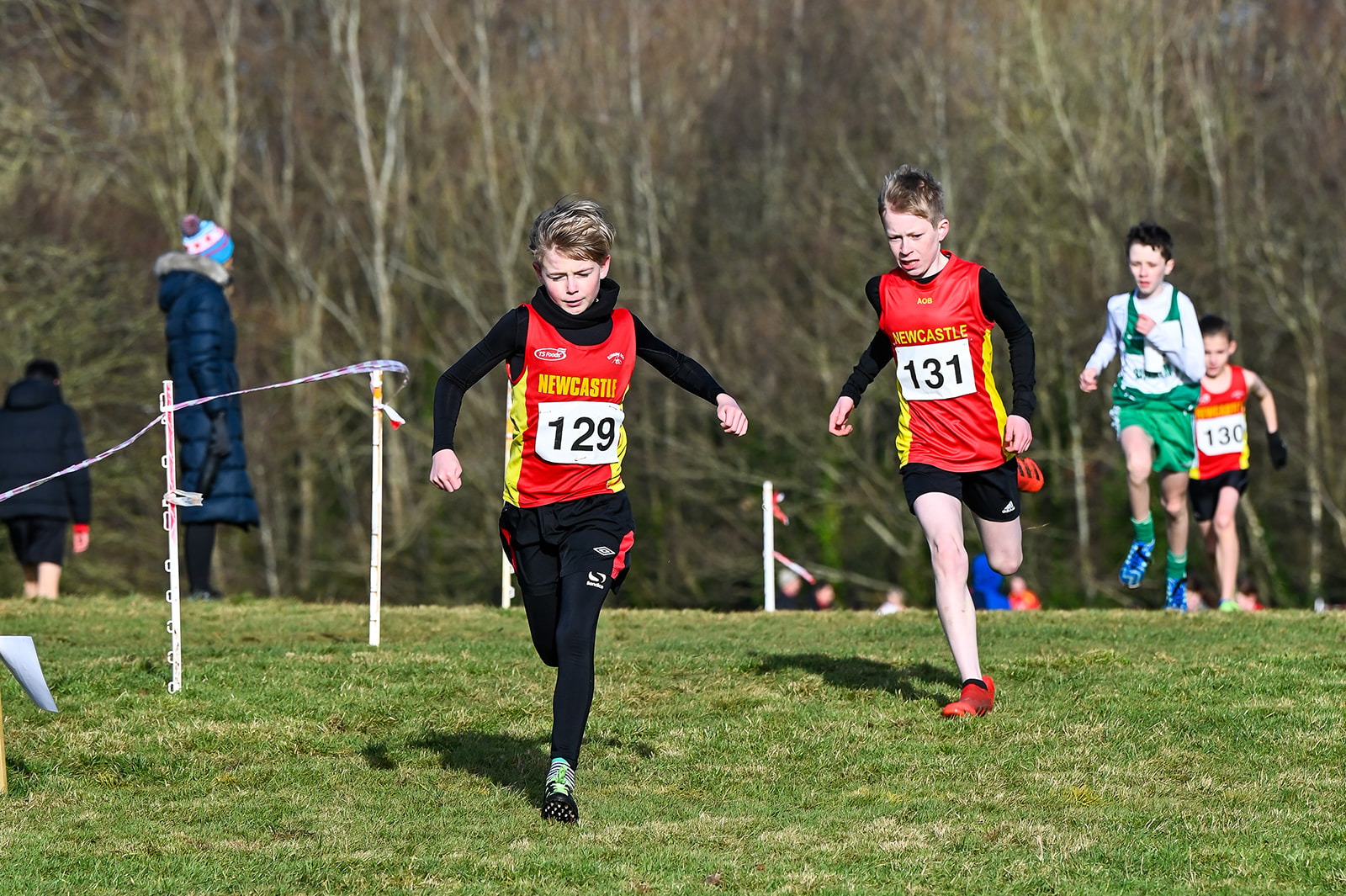 Club mates Henry Houston and Aaron O’Boyle fight it out at Delamont for first place. 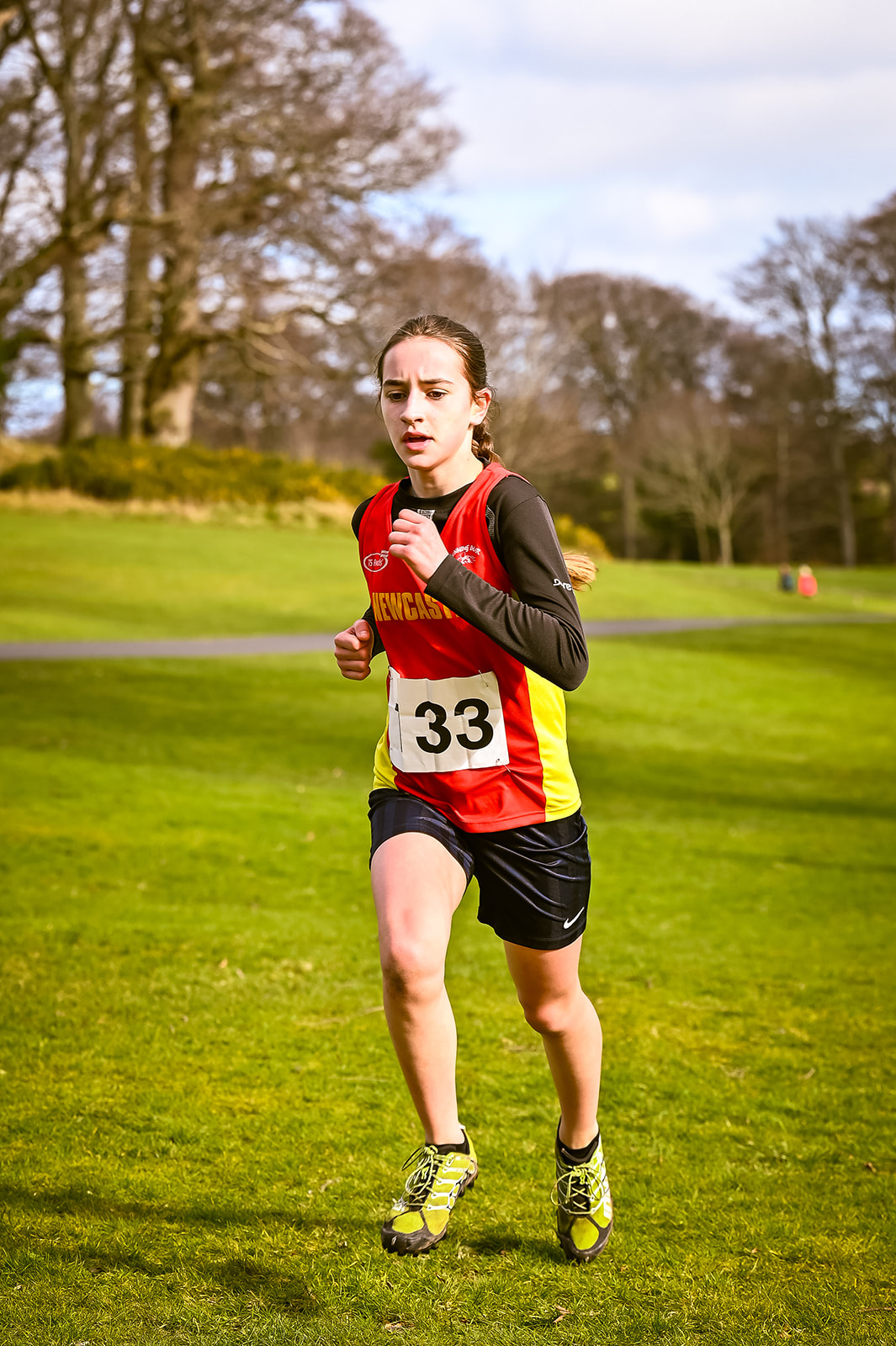 There was notable success on the track this year also with Henry Houston, Connaire Og Mc Veigh and Harry McVeigh taking part in various Firmus 5 meets at Mary Peters Track. We also enjoyed following the McVeighs On Tour as the boys represented the club at both Cross-Country and Track events across the country, cementing their feet on many podiums. 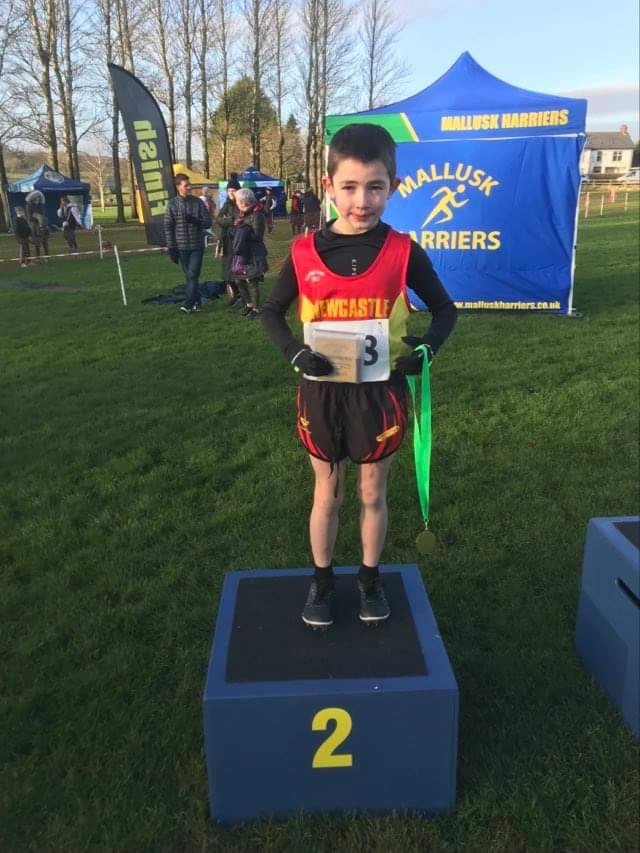 Showing promise, Harry McVeigh places 2nd at North Down XC in a category 3 years his senior.

The success of our young athletes in both the Flavahans Primary School and Ulster & Irish Schools Cross Country Championships demonstrated the lesson of you get what you put into training as the hard work each week paid off.

The biggest challenge for some of our juniors this year was their baptism of fire to the Under 16 category Hill & Dale Series. They took on four races, Castlewellan, Tollymore, Millstone and Drinnahilly. Well done to Callum Flynn, Euan McIntosh, Karim Jardine, Ellen Watson and Sophie Neil.

Our Under 18 Hill and Dalers did not disappoint either, so much so that Tom Crudgington was the overall series Male winner out of the whole field. Putting in exceptional performances, he also earned his place on the Irish Team for the U20 European Off-Road championships in Italy. His club mates Ethan McMullan, Patrick McDaid and Yasin Brannigan demonstrated their relentless determination to place well within the main field at each event – all 4 boys taking the 1st 3 places in the U18 category. Definitely a young squad to watch in the coming years as they transition to the MOpen category. 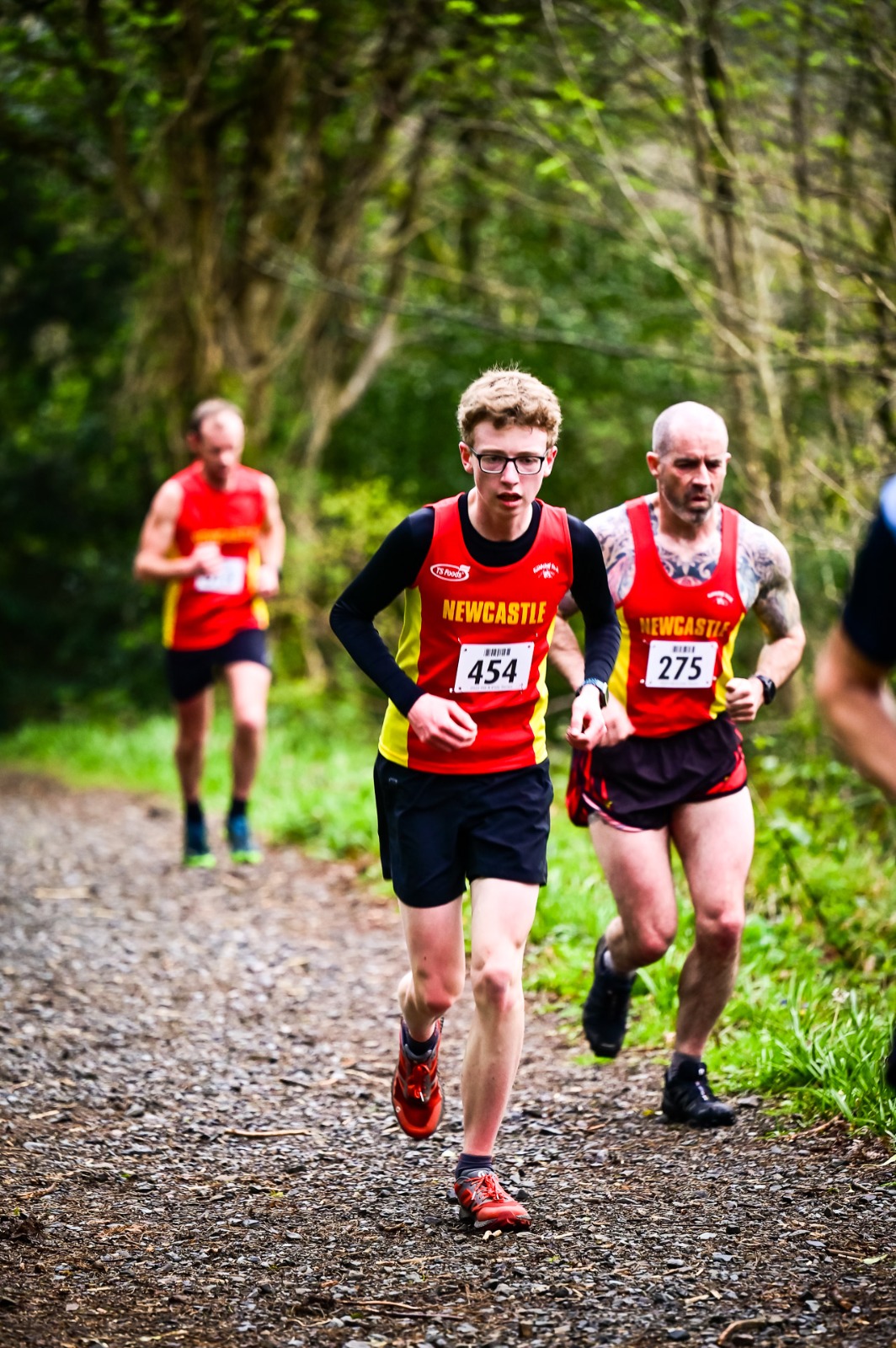 In the Under 18 girls Ciara Savage, who made her Slieve Donard debut finishing an impressive 92nd, took the U18 Category age win and showed how agile she is off road. Club mate Rebecca Magee took 2nd place overall in the category.

It wasn’t just within the Mournes that our Juniors challenged their mountain running skills. Recently Euan McIntosh and Ethan McMullan travelled to the U18 International Mountain Running Cup in Italy, with club coaches Phil Hodge and Catherine McIntosh, to represent Northern Ireland & the club, and competed against a large European contingent. 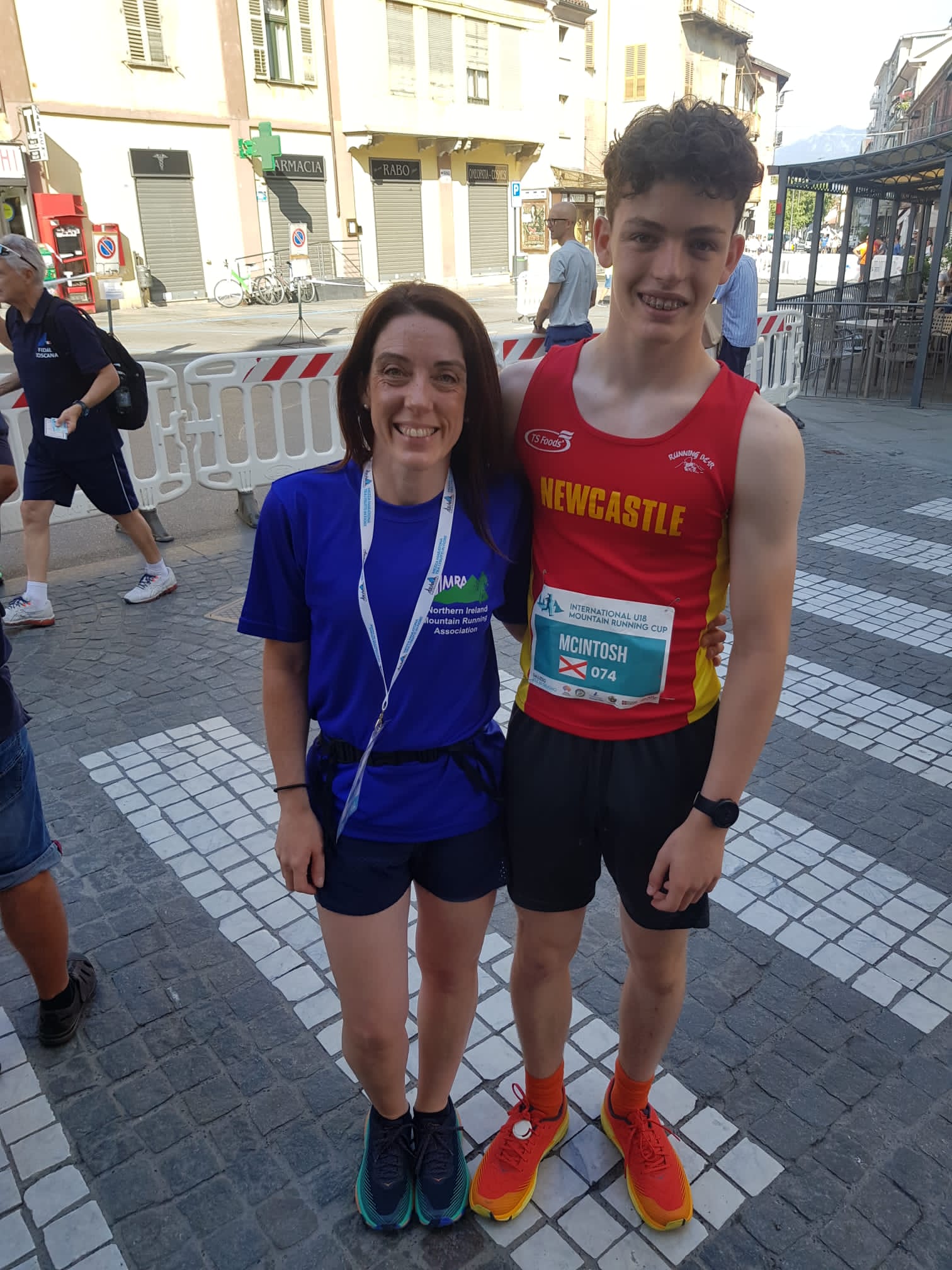 Coach Catherine and son Euan McIntosh take to the line in Italy representing the club at International events.

After ten months of group training, racing and fun, the Junior Squad headed to the Tuscano to celebrate all their achievements this year. If making Pizza disappear was a sport, we would have several members who would definitely not let the side down. Enjoyed by all with no one opting for a few laps of the promenade afterwards to burn the calories off.

A huge thank you to all our coaches (Thomas, Ryan, Sinead, Linda R, Judith, Linda M, Siobhan, Ciara, Declan & those mentioned above) who have week in, week out, attended training voluntarily  and made it fun and enjoyable whilst enabling and believing in the young people and their abilities. Currently there are 64 Juniors members, of all abilities, who attend training weekly in addition to our race only members. The Newcastle AC Juniors are the future of our club and many aspire to be like those who have come through the ranks of the junior squad in years gone by, chasing podium places. Yet first and foremost as a junior squad we want to nurture a love for athletics, to encourage the young athletes to return each week to keep fit all whilst having fun.