Saturday brought another historic day for Newcastle & District AC with the women finally emulating the men when they secured the Cross-Country League title at the final race of the series at the 2022 NI & Ulster Senior Cross-Country Championships in Gransha, Derry.

The series started all the way back in September in Palace Demesne in Armagh where the team secured victory but in a trait that almost derailed their title ambitions didn’t score maximum points as they failed to get 8 women across the finish line.

The points awarded are 16 for a race victory 14 for 2nd, 12 for 3rd and so on. Then each finisher up to a maximum of 8 secure an additional point for the league. So a team winning a race with 8 runners would secure maximum points of 24.

Newcastle & District had notched up 5 races so far and this, the last race of the league series, was to be its 6th and final race. Results to date had been:

This gave the club a total of 110 points after 5 races. Its main competitors going into the final race all had done 6 races so far, so the task for each of them was to improve in the final race on their worst score in those six. Leading was North Belfast Harriers with 126 points with North Down and Armagh AC in joint 2nd with 122 points.  So effectively the quest for Newcastle & District AC for the league title was in their own hands – maximum points available would be 24 (with a victory with 8 runners competing) taking them to 134 and with 134, indeed 132 points (so a 2nd place with 8 runners) would be a score no one else could match.

So the first challenge was to get 8 runners up to the race, onto the start line and also across the finish line. That was not without challenge with many factors coming into play including of course injury and COVID. It was, however, a challenge that was achieved with Linda Rogan making her first appearance of the season to become the ‘8th woman’.

Three 2k laps was the order of the day on a relatively flat course that by Saturday had absorbed the snow and rain that had been thrown at it all week. Yes parts of the lap were soft and became softer as the day wore on but it was also firm in places.

As the picture shows below there was a healthy bunch of women out front with Kerry O’Flaherty tucked in. Olympian O’Flaherty is now 40 and one of the women in the lead bunch was over half her age at 19-years-old. In fact it was that 19-year-old, Loughview’s Rebecca Rossiter, who had beaten O’Flaherty into 2nd place back at the Malcolm Cup in November. This time though it was to be different.

North Down’s Jessica Craig and Catherine Whoriskey made a break in lap two and eventually it was a decisive one with Whoriskey outkicking Craig for the title. Meanhile, O’Flaherty was battling it out with Rossiter and Lifford’s Claire McGuigan. Into the final lap and O’Flaherty’s strength showed as she pulled away to run the strongest race of her season, in fact her best race since her foot break in 2019, to come home for the individual bronze medal. 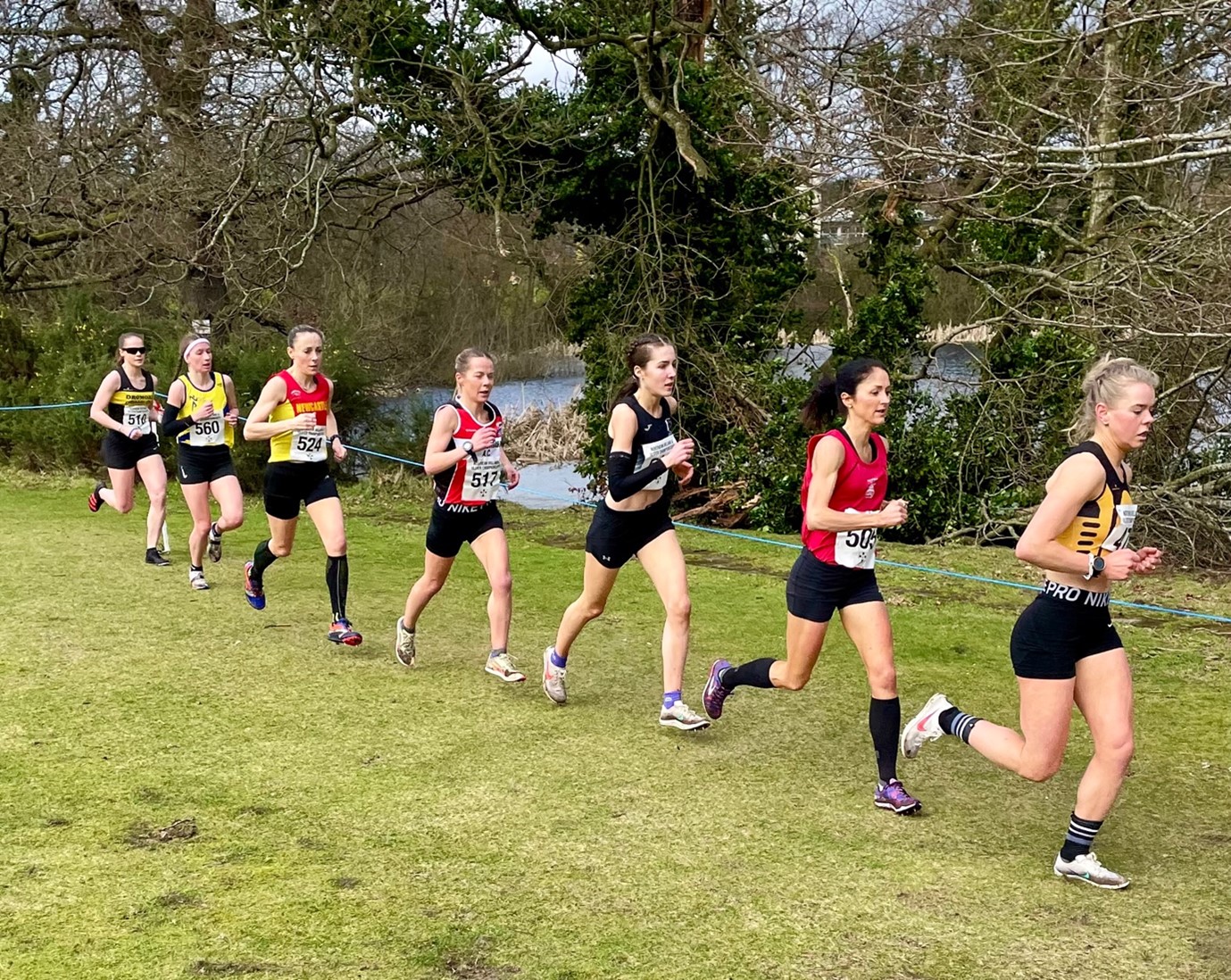 Behind O’Flaherty her club mates were running well too. Joanne Mills had the best cross-country season of her life and was solid in 9th place just ahead of Áine Gosling in 10th place. Gosling did catch and pass Mills in the 5th km but as promised Mills made the final km her fastest and re-passed Gosling to take 9th.

With three runners home, the team awaited the all-important 4th scorer. 16-year-old Ciara Savage runs with a smile on her face and had set out hard with Catherine McIntosh in pursuit. In the latter stages McIntosh passed Savage and both finished strongly in 38th and 39th place. Importantly too Donna Daly came home in 50th, Nichola Watson in 52nd and Linda Rogan in 64th to make up the all important 8 runners needed for the league.

So the Newcastle & District AC score came in at 60 points for a brilliant 2nd place behind North Down (33 points) and City of Derry in 3rd with 78 points.

This victory moved North Down onto 128 points (from 122) with North Belfast (in 4th place today) staying on 126 points and Armagh (in 5th place today) moving to 124 points. For Newcastle & District AC, 2nd place today with 8 runners meant that 22 points were added to the total to given them 132 points and win the league title by 4 points – congratulations to the women on winning the league title for the first time to add to the 2 league titles won by the men in 2015 & 2017. In all 13 women contributed to this maiden victory over the 6 races:

Congratulations and thanks to all for being part of this superb achievement. 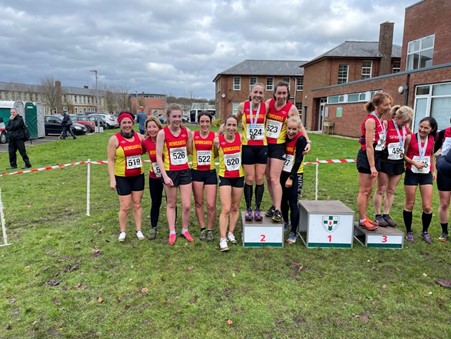 Next up after the women were the men, who although not participating in the league this year, did well to get a full team out for the championship race. Double the distance for the men with the race being over six 2km laps.

From the gun, Zak Hanna made his intent known as he settled into the lead pack, numbering 15 at this stage, alongside training partner Mourne Runners’ Andrew Annett. He was running a sensible race, clocking off the kms and the laps in and around 5:30 mile pace.

Men’s pack at the front early in the race – from the right – Neil McCartan, Andrew Annett, Eskandar Turki, Conan McCaughey and Zak Hanna

Slowly the lead pack was being whittled down and at the end of lap 4, with around 10 still in contention, North Belfast’s Conan McCaughey put in a decisive surge and broke the race open. Annadale Striders’ Eskander Turki then also broke from the pack in pursuit of McCaughey. McCaughey’s surge was relentless over the final two and a half miles and he went on to win in 39:58. Turki couldn’t get close and finished in 40:25 for 2nd place. Behind there was a major scrap for bronze with first Annett and then East Down’s Neil McCartan making a break for it.

As the race entered its final lap, it was Hanna who clawed McCartan back and with 500m to go he moved into 3rd place. However his lead wasn’t decisive and with around 80 metres to go McCartan struck with his 3:50 1500m pace and re-took 3rd place to secure bronze in 40:37. 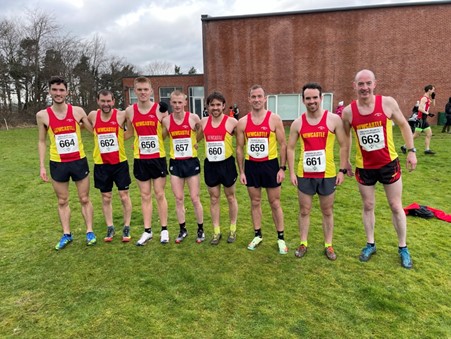