Stunning victory by Brown in Carlingford, chased home by McNeilly

Congratulations to Newcastle & District AC’s Aidan Brown on his excellent victory in the Carlingford Half-Marathon on Saturday (7th March). Brown led from the start with club mate David McNeilly also emerging early ahead of the over 900 starters at Carlingford Yacht Club.

The course is undulating and the weather conditions were typical of 2020 so far – grey overcast skies, a hint of rain and wind, wind and more wind – this time from the direction of Dundalk, into the face of the runners on the first few miles but even as they turned at the coast and headed for Greenore it wasn’t exactly helping. All the more credit for the times that were achieved on this course that boasts almost 300 feet of climbing.

Brown’s PB dates back a couple of years to the Bohermeen Half-Marathon in 2018 where he had clocked 1:17:45. He went close to that in the Belfast Half-Marathon in September 18 (1:17:53) and after clocking 2:44:52 in the Dublin Marathon last October his PB was due for a re-writing. He led every step of the way and despite being distracted by a fan on a mountain bike with still 5k to go, he came home to win in a new PB in the challenging conditions of 1:17:28. 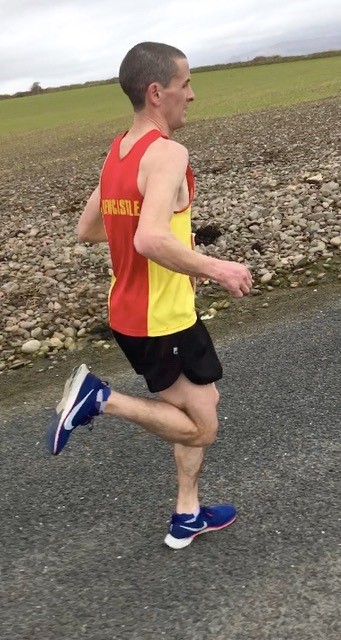 Aidy Brown striding out to victory.

David McNeilly is the same age as Brown and has a long successful career on the mountains running internationally for many years. He plans to run the London Marathon in April and after several fallow years, this target has helped him refocus in training and he seems to be enjoying his racing again. He doggedly chased Brown down in the later stages, closing to nearly 10 seconds at one point and was more than satisfied with an impressive PB of 1:17:43 in 2nd place – what might he run in London? 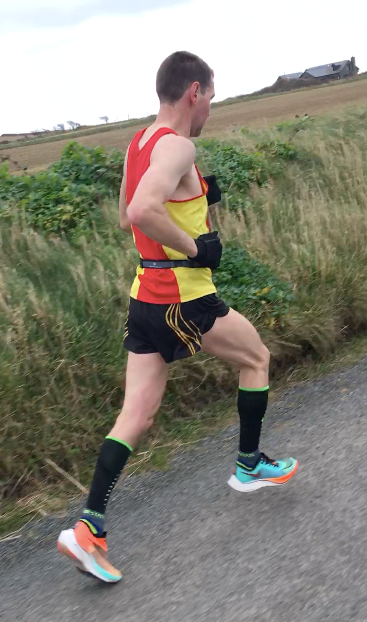 David McNeilly on the chase in 2nd place.

James King, another relatively new runner on the scene, set off at great pace – and emerged at 3 miles on top of the climb out of the village in 5th place. Then his early enthusiasm got the better of him and the wheels came off and club mate Noel Gallagher, aka Wonderwall, passed him into the 5th mile. Wonderwall is another enigma and has set the target to run a sub-3 hour marathon – a time that he was only 28 seconds outside in Manchester a few years back – but has managed to self-conspire (subtly different from self-isolate) to finish outside 3 hours at every attempt since. Wonderwall is not known for his canny racing but whilst today was better, it was still far from perfect – will be ever run an even-paced race? At 8 miles he monetarily moved into 3rd place overall, making it a Newcastle 1,2,3 but Jonathan Healy had other ideas and promptly re-gathered and passed Wonderwall again. 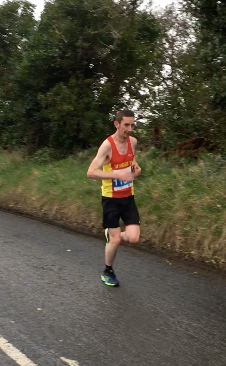 James King ‘fresh as a daisy’ at 3 miles.

At 10 miles Wonderwall was 60:59 with King now finding a new lease of life and around half a minute back in 7th in 61:31. So the wheels were back on for King and wheels were off for Wonderwall. Into the home straight, King went straight past Wonderwall to finish in an excellent 5th place and a big PB of 1:21:10. Wonderwall crossed the line in 1:21:17 with a big smile on his face and well he might for it represented nearly 3 minutes off his PB from a few years back – life in the older dog yet. What chances a sub-3 hour clocking now in an upcoming spring marathon?

Noel Gallagher ‘buzzin’ at half-distance on way to big PB.

Having turned 50 just before the end of 2019, Phil Murdock has a new lease of life and a consistent and focused block of training has seen him get to the shape of his life. He plans to tackle the 3 hour barrier at the London Marathon in April and on current form has a great chance. His best ever marathon was in London in 2017 where he clocked 3:10:08 – can he go 10 minutes and 9 seconds faster? The signs are good with a 10k PB of 38:33 in November past at the Seeley. His half marathon PB was from Bohermeen in 2018 where he had clocked 1:27:21 and here in Carlingford he ran just outside 1:31 last year. 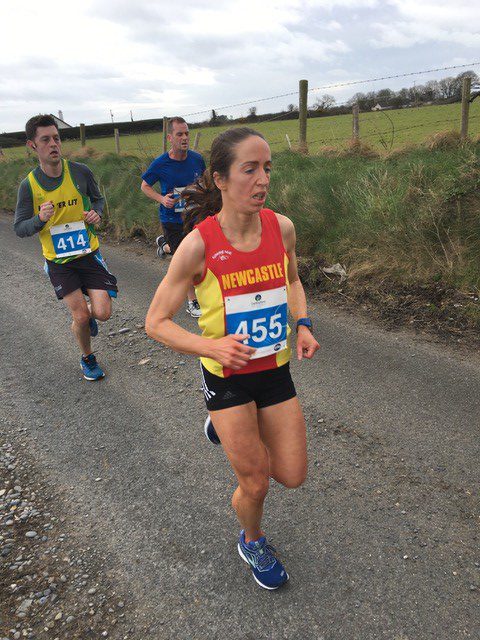 “Into the Hurt Locker” Áine Gosling at 10miles

Paul and Áine Gosling would get the prize, if there were any prizes, for the fastest husband and wife in the race. Paul is naturally talented and with a few carefully planned miles under his belt can come out and run personal bests. Just outside 66 minutes for the Trim 10 in February he passed 10 miles here in 66:10 and came home in a half marathon PB of 1:27:25.  Meanwhile, Áine ran a well-paced race, 20:27 at 3 miles, 27:00 at 4 miles, 67:30 at 10 miles – bang on 6:45 mile pace and a half marathon pace of 1:28:30. Her personal best is 1:29:12 from the Belfast Half-Marathon last September and having been well inside 1:29 pace for so long, she just faded a little of the final 3 miles to come home in 1:29:45. She was a bit disappointed but 5th women overall and 54th in a field of over 900 doesn’t leave too much room for disappointment. Her focus will now turn to breaking the 40-minute barrier over 10k in Titanic at the end of the month. 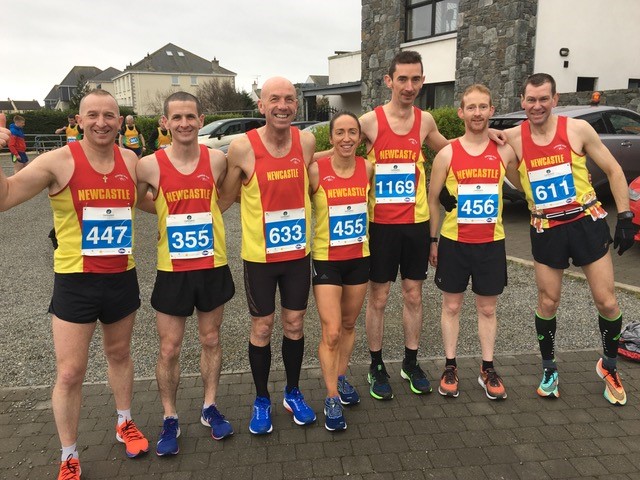 The 22km mountain race had been limited to 260 experienced hill runners with most competitors from Ireland and UK but also numerous international entries. The UK Sky Runner race series includes the local Mourne Skyline race in October each Year.

The event was based at Killary Adventure Centre, below Westport. Due to the exceptionally wet conditions the route had to be changed to reduce the distance in the mountains needing marshals. By repeating part of the route, the distance and climb were not reduced.

The race started close to the adventure centre and competitors were quickly splashing through soft ground onto the steep, soft mountains. Driving rain and hail added to the fun! Respect to the marshals on the mountain tops. The descents were particularly treacherous with competitors sinking in above their knees in places

While most were enjoying great success and PBs in Carlingford, two NAC athletes made the trip to the Maiden City to compete in the 10 Mile Road Race. Regrettably the Walled City Marathon, traditionally held on the first Sunday in June has been cancelled, so this race became even more popular, selling out well in advance. 1078 took to the line in windy, but dry conditions at the Foyle Arena to follow a scenic and route around the city.

Francis Tumelty, returning from injury and looking leaner than ever, had a sensational run, clocking 1:01:56 (averaging 6:12 throughout) to come home in 39th place overall. Joe McCann in his first of two weekend races had a more modest run, finishing in 696th place in 1:35:44, but thoroughly enjoying running the course with the Murlough AC ladies, Aoife, Anne and Hazel. A mini Double Decker proffered at the finish line made the 210-mile round trip worthwhile!

The pinnacle of athletic achievement for schoolboys and schoolgirls is competing at the highest level against their peers from the length and breadth of Ireland. Qualification is a two-stage process. Firstly, through the Districts (and Down is arguably one of the tougher districts) and then at the Ulster Finals at Mallusk. Two NAC athletes managed to negotiate this process and were in action in Santry on Saturday. Firstly, Tom Crudgington (Down High School) achieved a very credible 30th out of 91, despite being in his first year in the intermediate category. Similarly, Ruby McNiff (St. Patrick’s Grammar School) is also in her first year in her category and ran extremely well to finish 27th out of 70. We are confident of greater achievements in 2021 when both are at the top end of their age categories. 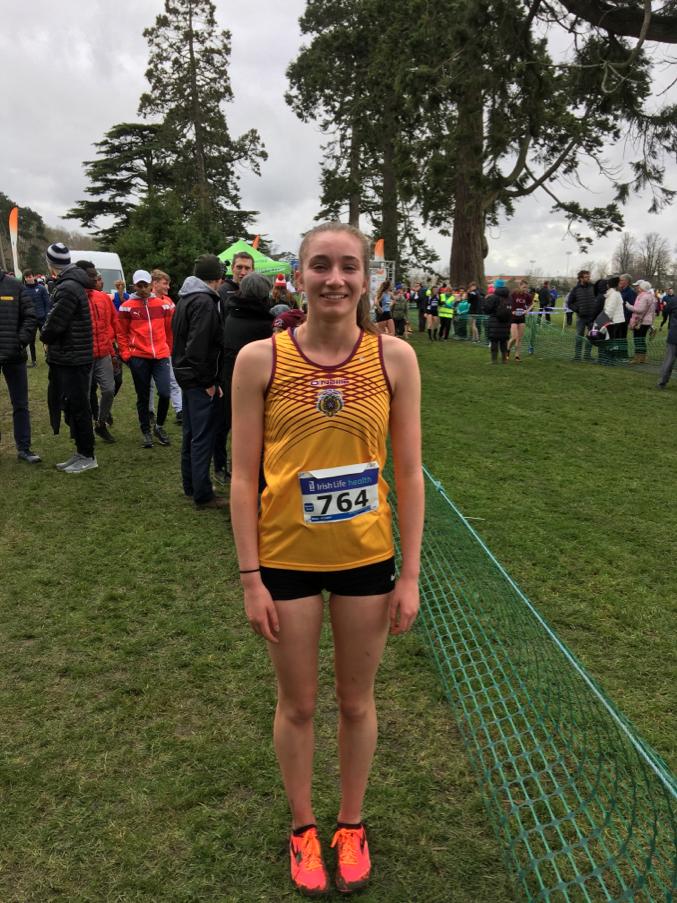 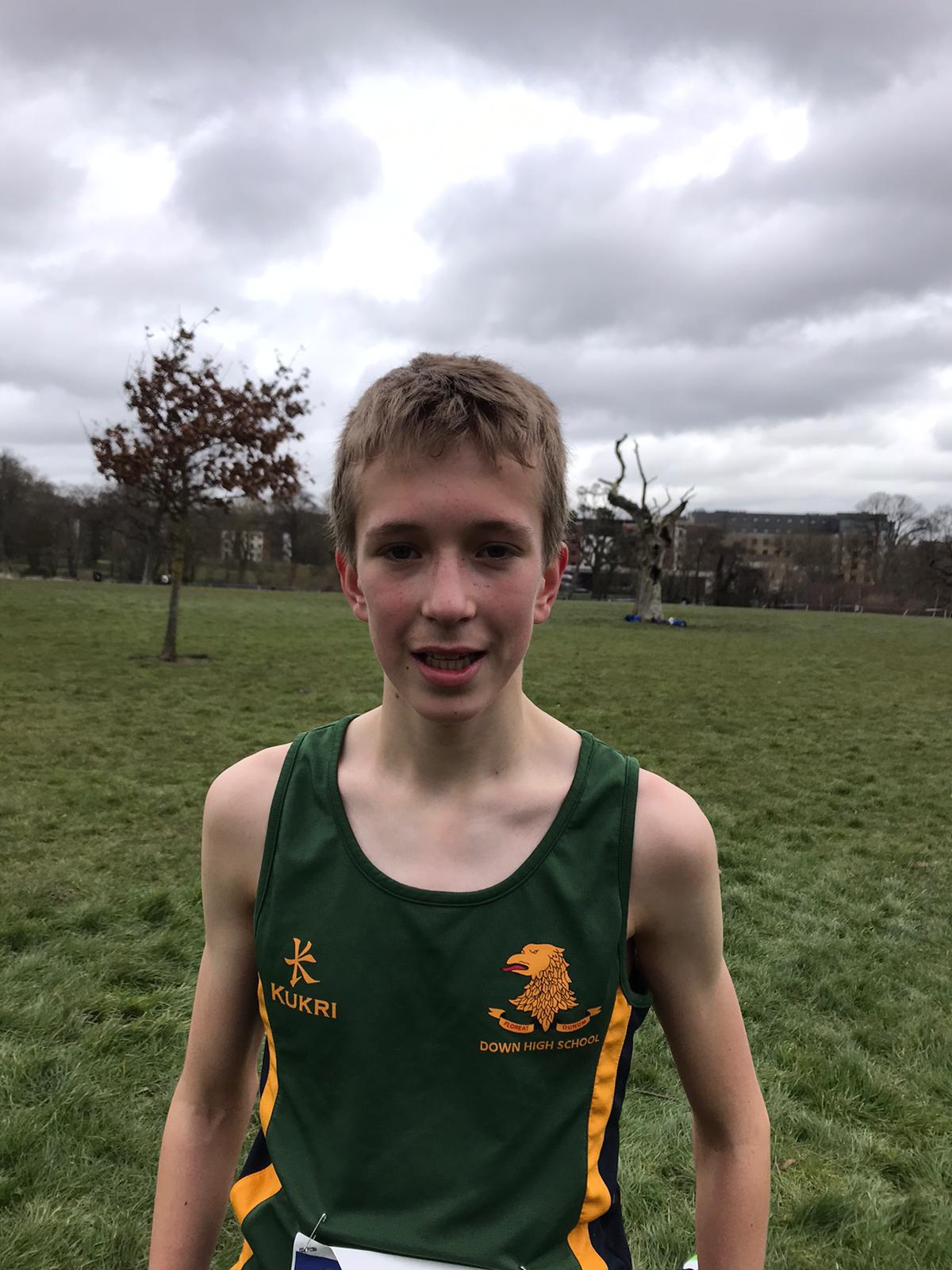 The annual pilgrimage to Bohermeen, just outside Navan for the Spring Half Marathon has been an integral feature of Marathon preparation for the NAC faithful for a number of years. This year it was the same weekend as Carlingford, which resulted in less interest than usual and negated the need to book a bus for the maybes.

For the ever-improving Franky McGivern it was an opportunity to chase the holy grail of a sub-1:30 for the 13.1 distance. His final preparations in the 5 weeks leading up to the race have been excellent and so all things being equal the 6:52 pace needed to achieve the target seemed eminently possible. Inspired by the unbelievable achievements of his peers a day earlier and buoyed by the presence of the Prophet in the back seat anything seemed possible. Conditions, though not ideal were not too bad (notwithstanding the biblical shower of hail around 50 minutes in) and the course lends itself to fast times. McGivern did not disappoint and in typical metronomic fashion knocked off the miles at just inside the prescribed pace. He crossed the line triumphantly in 1:29:06, almost a minute under the target and looking as fresh as a daisy.

Gathering his medal and finisher t-shirt, he returned t the finishing straight to welcome home his club mates. Having saved something in Derry, the previous day, McCann had more to offer in his final race of the weekend and after a conservative start gathered significant momentum in the second half of the race, recording a substantial negative split to finish in 1:40:00 (506th place), his best performance for quite a while.

The third member of team NAC, Stephen Knight, had an exceptionally consistent run. He had the company of the Prophet for the first half of the race. In the second half he stoically stuck to his plan and came home in 1:56:27 (913th place) and bang on his marathon target time. Today was not about racing for Stephen; it was about completing even paced miles in the atmosphere of a big race. On the way home, after the mandatory feed in Monasterboice, the Prophet declared that he will be fit for this race next year and is guaranteeing that at least 25 NAC members will also be competing – a serious contender for the ‘silly boy’ award! 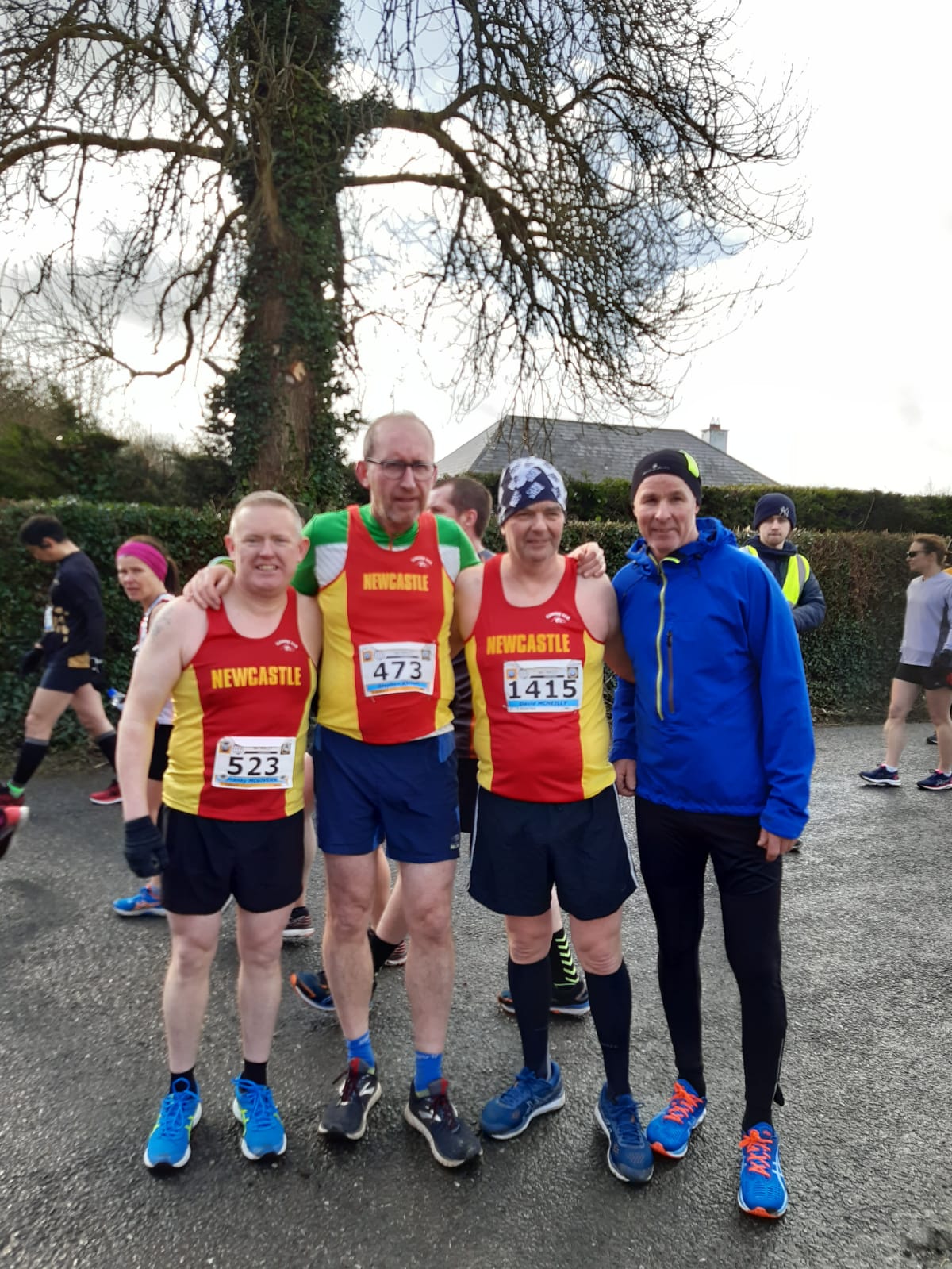 The 2020 mountain running season began at Slieve Gullion, 83 runners starting into a strong head wind, with Newcastle AC’s Deon McNeilly first to the summit of Gullion. On the decent the younger runners, making the most of the strong tail wind, quickly passed McNeilly in the fast slippery conditions made worse by the recent wet weather, with Orangegrove AC’s Andrew Tees taking the win 9 seconds ahead of BARFs Adam Cunningham and Newcastle AC’s David Hicks returning from injury to take an excellent 3rd place.

In the ladies race Newcastle AC’s Mari Troeng making the most of her fast road form,  first to the summit. Newry AC’s Esther Dixon, the more experienced mountain runner passing Mari on the decent to take the win in a new course record of 35.40 with Mari holding on to 2nd well ahead of Mourne Runners Sarah Hanna in 3rd place. In the ladies team race Newry AC took the win with Newcastle AC ladies, Mari, Sam McNeilly and Donna Daley runners up ahead of Mourne Runners.

After the race the runners travelled to Mullaghbane community hall for the usual tea and sandwiches arranged by Armagh AC to wait for the prizes, well known for being one of the most extensive the Mountain Running calendar thanks to generous support from Armagh Sports. 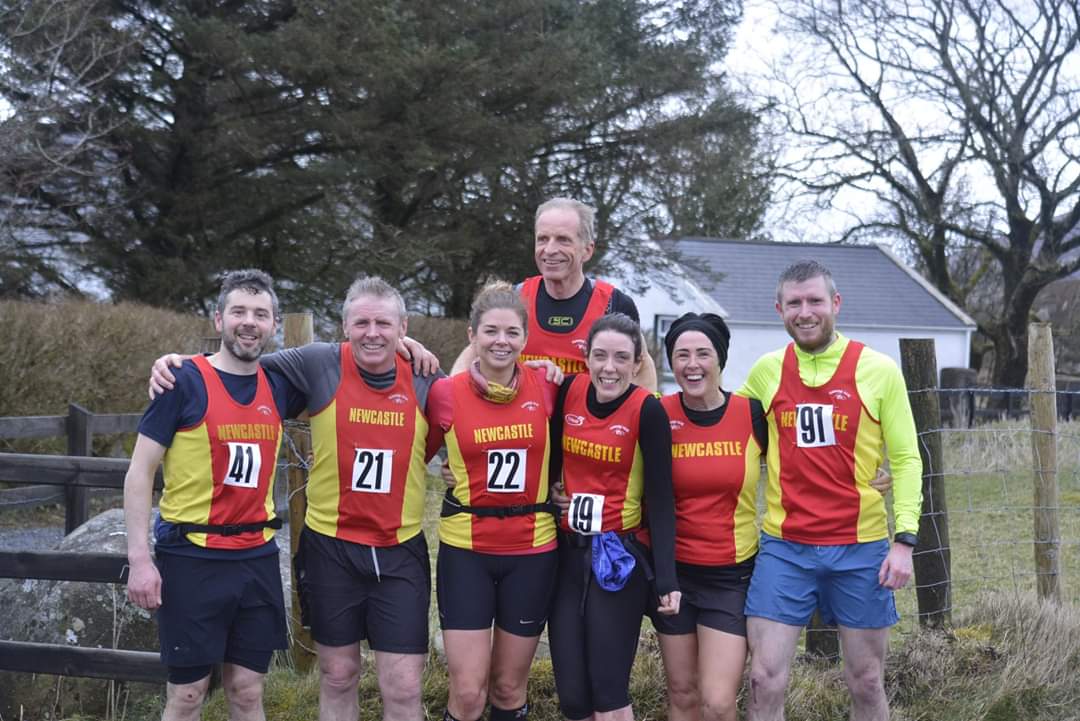 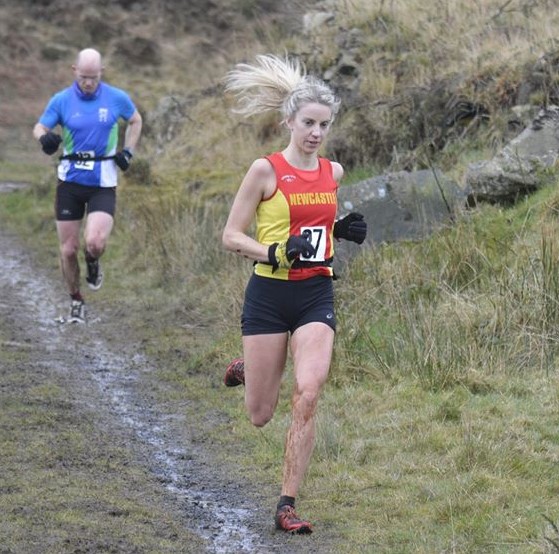