The NI & Ulster Senior Cross-Country Championships returned to Ulster University at Coleraine for the first time in several years, sponsored by local estate agents and former international athlete Phil Tweedie, on Saturday. Newcastle & District Athletic Club have won the title once, 2016, and City of Derry were back to try and secure a 4th team title in a row. The most successful cross-country captain in the club’s history, David O’Flaherty, whose reign (after taking over from David McNeilly’s successful captaincy) stretches back to Cross-Country League win in 2017, bronze in the Senior Champs, a team victory in the Intermediate where Zak Hanna won with Patrick McNiff 2nd plus team medals at the Irish XC Champs in Divisions 3 and then 2. This year again the bus of ‘maybes’ turned into a bus of ‘definites’ and 17 runners and ‘one hanger on’ set off for the north coast, or at least almost to the north coast in typical February wintry conditions.

Wind, wind and more wind described this February best and today squally hail and sleet showers were hurled in for good measure. First up were the 3 women who travelled and it was such a shame that there wasn’t a 4th runner for surely the women would have been destined for senior team medals if they could only have found one more volunteer conscript. Shalene McMurrary is notorious for her fast starts but today she settled in sensibly into the pack early on. The women had 3 times the 2k lap that included a bit of climbing along with mud, mud and more mud – hardly any firm going on the course at all plus a gale that would cut anyone in two – tough conditions where only the tough would prevail.

Emma Mitchell, these days running for Clonliffe Harriers, pulled away and won with relative ease in 24:09. Behind there was a real scrap with 3 women frighten it out for the other two medals. One of these was Shalene McMurray, alongside Lauren Wilson of Lagan Valley and Catherine Whoriskey of Citty of Derry. They were nip and tuck the whole way and then with around 600metres to go, Whoriskey struck out hard and moved into 2nd place taking Wilson with her. McMurray had run a determined race and left everything out on the course being passed by Beechmount’s Sarah Laverty in the home strategic to record a very creditable 5th place in 25:10, one day before her 42nd birthday. 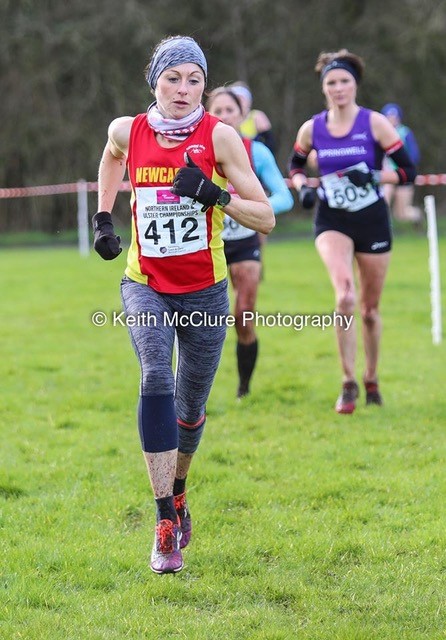 Behind her, team mate Mari Troeng continued her run of excellent form coming through all the while to finish in 7th place in 26:10. The third Newcastle woman home was Joanne Mills who went out hard and held on as long as she could – 19th in 27:44.

Mud, what mud? Mari Troeng in the XC form of her life

The men faced 6 laps, double the number that the women did and double the fun – especially now that any firmer ground was well and truly ploughed up. The cavalry charge of over 200 men was a sight to behold, into the narrow gap that dropped the field down towards the Bann River, into an area that they criss-crossed for the best part of a kilometre before emerging up the hill to the kilometre upper loop that included a tough we hill that would prove to be decisive in determining the final medals.

As the club approaches its 39th birthday in late spring, this year’s cohort of red & yellow were prominent to the fore from the beginning – a mix of youth and experience – 20 somethings, Patrick McNiff, Daniel Molloy, Zak Hanna and Rory McMullan; 30 somethings Luke McMullan, Seamy Lynch, David O’Flaherty, Thomas O’Gorman, Sean Russell and Aidy Brown; 40 somethings Connaire McVeigh, JP Gartland; and finally to celebrate just turning 60, Cathal McNiff, dad to Patrick, made up the ‘lucky for some’ 13 and it was a joy to watch him encourage his son as he passed him for the first time down in the meadow with Patrick lying in 4th place. 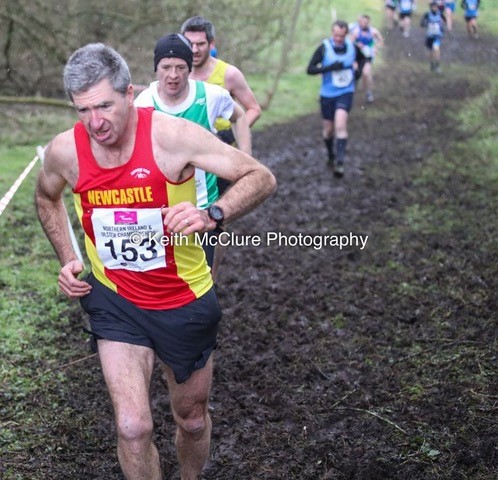 The race started with the usual charge with the red & yellow packing well across the first half of the field.

Soon there were 9 clear… 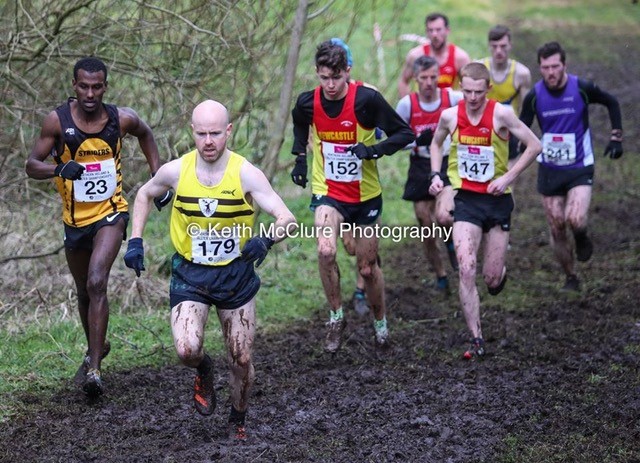 This picture captures Hanna and McNiff in 4th and 5th place – and clearly captures the waterlogged nature of the course after all the race of the past few weeks – add in gale force winds from the northwest and sleety showers and you serve up a classic cross-country challenge. 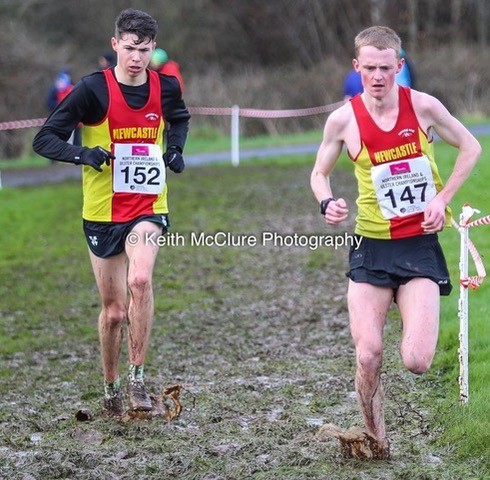 Still only 20, Daniel Molloy scythed through the field to come home in an impressive 19th and NAC’s 5th scorer of 6. 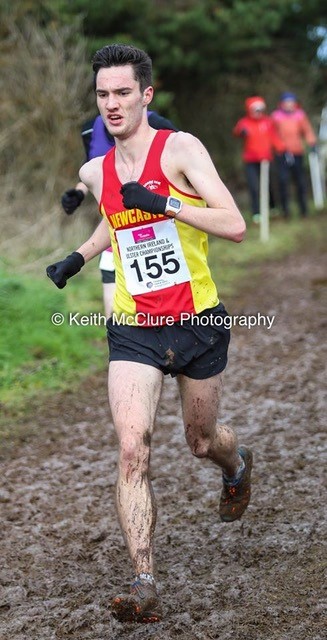 Great packing and concentration etched on faces – Connaire McVeigh looking for ‘better going’ on the left with endurance man Luke McMullan in the middle and Aidy Brown, the team’s 6th scorer in 23rd on the right having the cross-country race of his life. It’s not just about the 6 scorers but also about the strength in depth with other team members pushing rival teams’ scorers back down paces. McVeigh was 7th team man home in 28th with Luke eventually finishing 55th and 11th team man home. Luke’s brother Rory started more steadily than his sibling and came through strongly to record 37th place and 8th team man home. 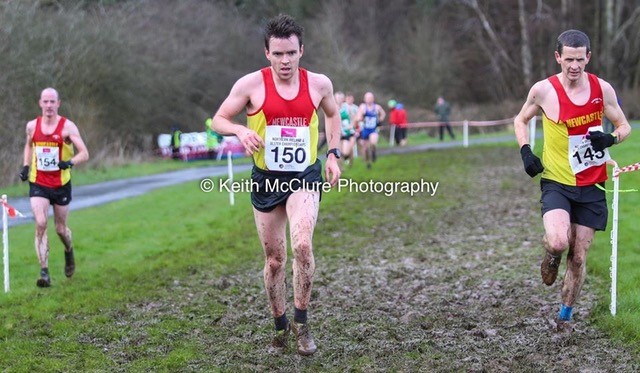 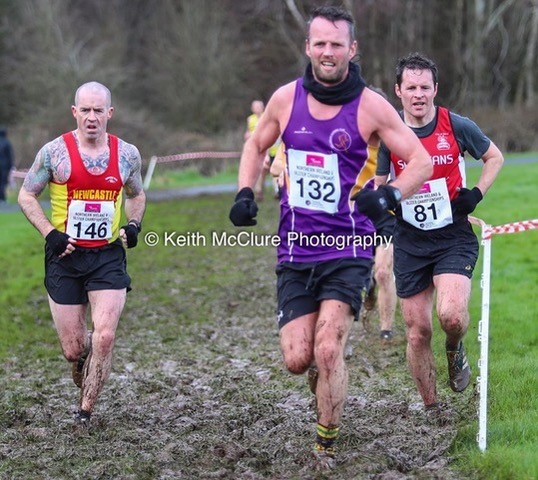 Mud or no mud this picture captures the speed that the runners were maintaining. Club cross-country captain, David O’Flaherty, just 3 months into his comeback ran a brilliant race for 13th overall and 4th scorer on the team. 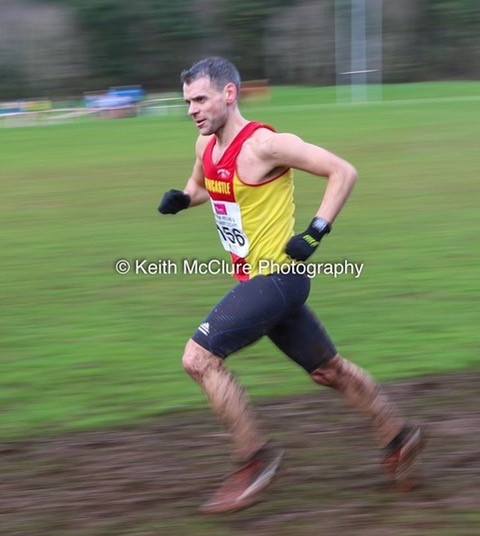 Seamy Lynch, in the home straight still looking fresh enough, ran a great race to finish just inside the top 10 and 3rd scorer for the NAC team. 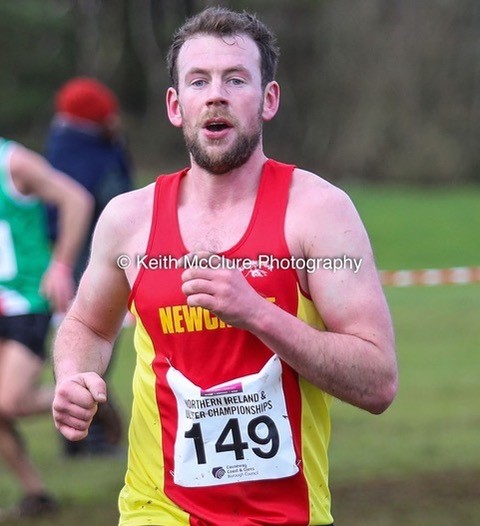 World of pain – 12km is a long way especially when the conditions are like this. Hanna battled all the way, left nothing out there and having been in 5th for much of the race, lost a couple of places in the run in to come home in 7th and 2nd team scorer. 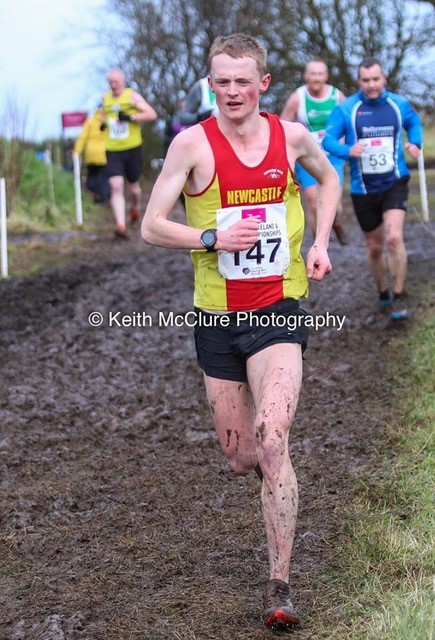 Having the cross-country race of his life – and that’s saying something – a brilliant run in the Stirling International in January was followed by victory over 8km at Gosford Park in the NI & Ulster Intermediate Cross-Country later in the month. He since then re-wrote his 3000m PB (8:32.2 indoors, 9 seconds inside his PB) and 5000m PB with 14:23 in the Armagh 5k on the road (inside his PB from last summer of 14:40 on the track). 12k of muddy cross-country his past the end of the range for the 20-year-old but he never gave up in Coleraine and having been as far back as 10 seconds on Mark McKinstry in 3rd place he closed in the middle of the final lap to an agonising 3 seconds before McKinstry ran a strong final hill to pull away to beat McNiff by 6 seconds. He recorded a superb 4th place. 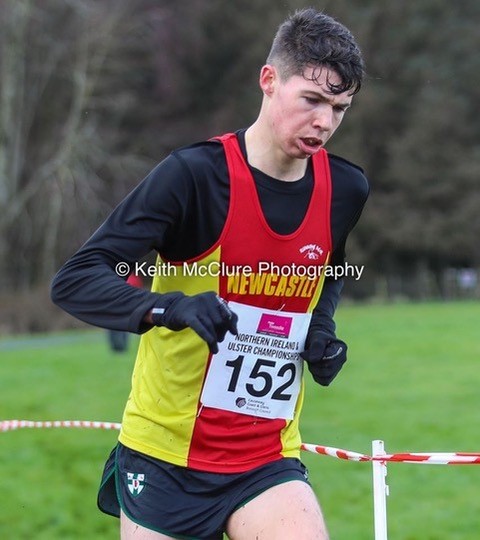 Another nominee for the ‘wiser eatin grass’ award emerged in Coleraine in the guise of Thomas O’Gorman, who had to say the least a very eventful day. He started in Castlewellan Forest Park at the Born to Run 10k and came home a very creditable 3rd place in 36:24 on the very undulating course. Jumping in the car, he probably drove a little too fast to Coleraine to take part in the cross-country champs. 12km in the mud after a great performance only a few hours earlier means that he is simply mad or maybe he’s training for an ultra somewhere? Fair play on his 54th place and 10th team man home. 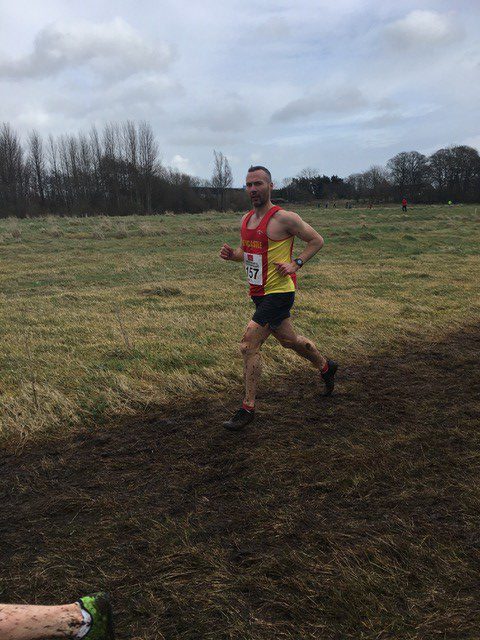 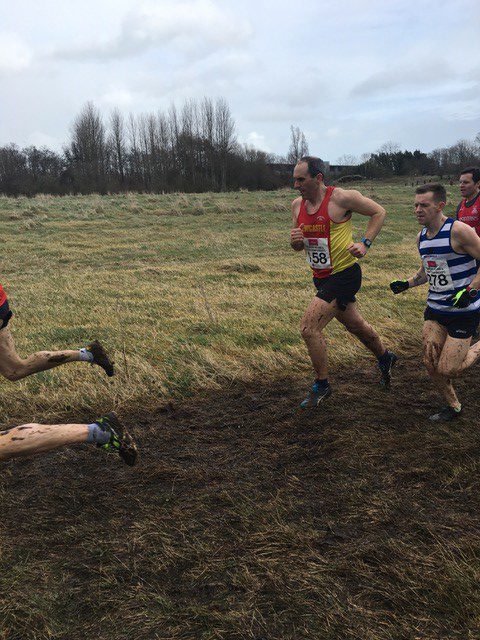 Celebrations with the trophy by the 13 magnificent men… 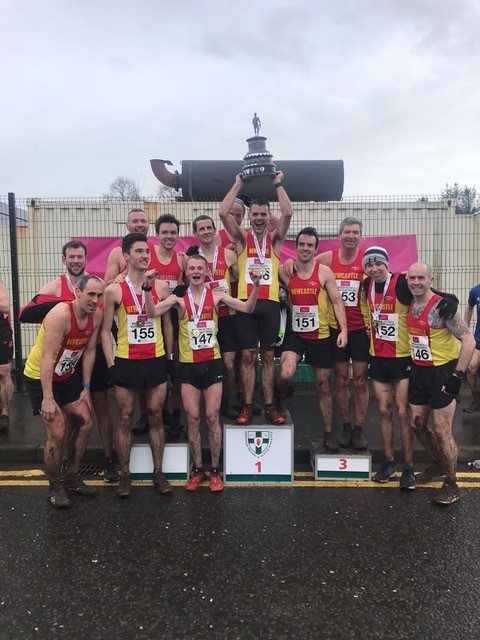 Newcastle & District Athletic Club took the team title with 76 points and a clear victory over 3 times defending champions Spartans of Derry (101 points) with North Belfast harriers third with 161 points. 17 clubs in all finished a team.

ps Congratulations to 15-year-old Tom Crudginton who won the Born to Run 5k in Castlewellan Forest Park in a creditable 17:26 on the hilly course.