New Year, New Decade – darker January days to start with and runners seeing what can be achieved on race day after all the work in the latter days and weeks of 2019. January is mainly about cross-country (and also probably putting in the miles for the spring marathon up ahead when the days lengthen once again).

It was Patrick McNiff’s day. Building on his breakthrough performance a fortnight earlier in Scotland, McNiff led the field from start to finish in the NI & Ulster Intermediate 8k Cross-Country Championship to keep the title in the club after last year’s victory from Zak Hanna. Conditions were firm which made a change from most of the other races of the winter where mud had been the order to the day. 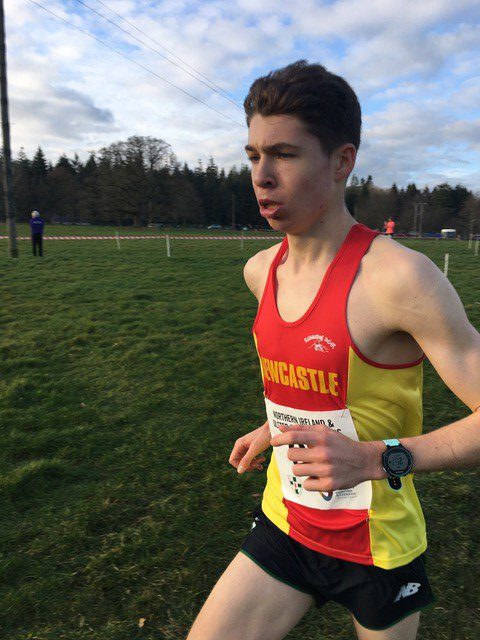 McNiff flowing freely at the head of affairs

First race up was the Women’s Intermediate Championship and Mari Troeng had the race of her life to win a great tussle for 3rd place passing her Finn Valley rival in the finishing straight. 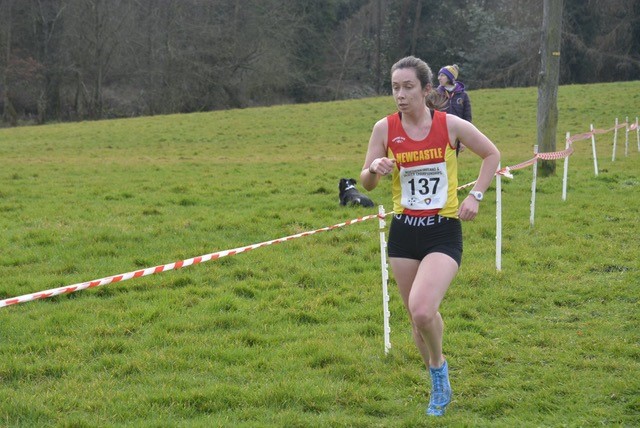 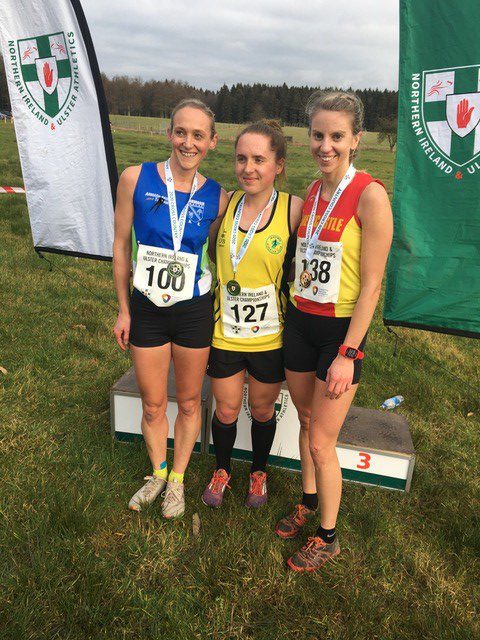 David O’Flaherty made his first appearance in cross-country for over 2 years and showed he hasn’t lost the knack coming home in a great 8th place in 28:05 to lead the 4-man scoring team to a silver medal (52 points) in the championship ahead of North Belfast Harriers (58 points) and behind winners Finn Valley from Donegal with 31 points. 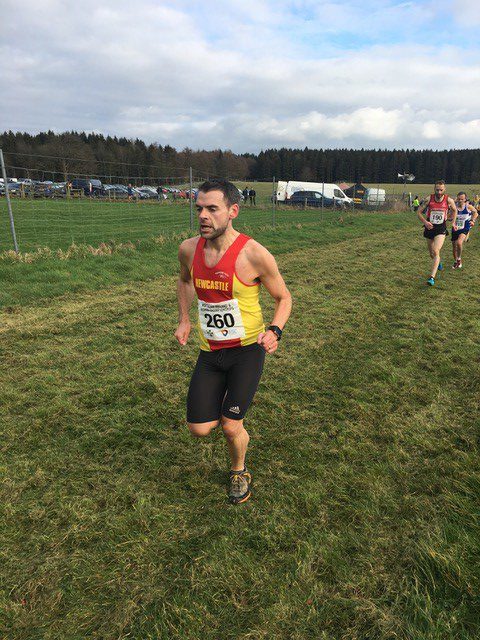 Aidan Brown had a big breakthrough in the Dublin Marathon in October past running a massive PB of 2:44:52. He recovered well and is taking this lifetime best form onto the roads and the country now. He started steadily and was gaining places all the way through coming home in 12th place in 28:38 gaining a valuable place in a sprint finish. 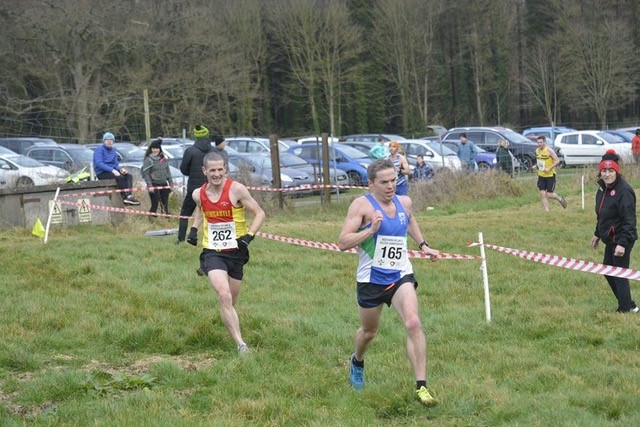 Brown about to move into 12th place in the finishing straight

David McNeilly is preparing for his first ever road marathon – London in April – and interrupted his training to compete in Gosford. He showed his best recent form coming home in 14th place in 28:53. 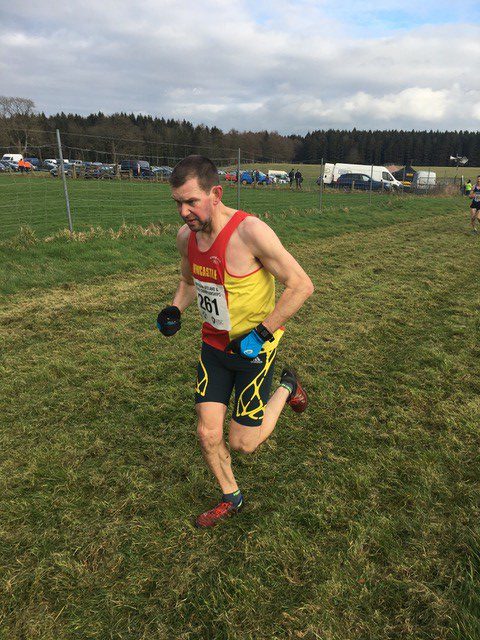 McNeilly focusing on the job in hand

Making up the scoring four was an excellent performance in 18th place from Hilltown’s Thomas O’Gorman (29:08). Shalene McMurray set out at her trademark breakneck speed and led by 15 metres at the end of the first mile of three. She was however, reeled in by eventual winner Claire McGuigan from Lifford Strabane. Speaking afterwards McMurray said that she had the cold and just ‘went for it anyway’. She hung on in lap three to secure the bronze medal in 18:11 and should use this as a springboard back to more racing after a period of absence. Congratulations also to Áine Gosling for her 5th place, demonstrating her new-found strength as she prepares for the Dublin Marathon later in the year. Donna Daly and Linda Rogan made up the scoring 4 in 61st and 72nd respectively. At 3 miles the race was some way short of their preferred race distance and terrain – they excel on long mountain races where the climbs are steeper and the ground is rougher. 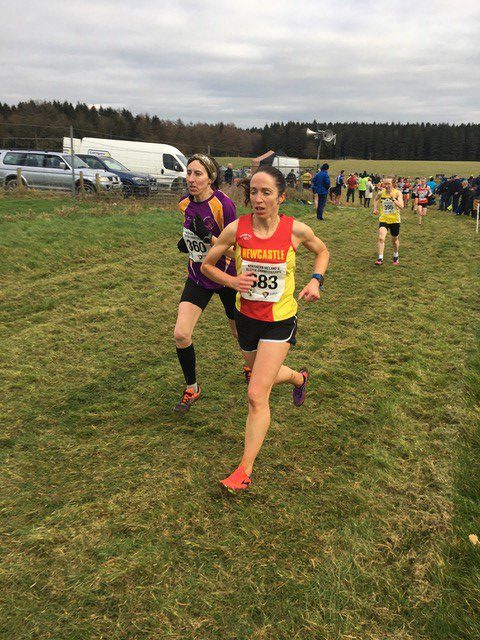 Gosling ran a lifetime best over the country to come home in 5th place (19:02)

8km over 5 laps was the distance and in very benign conditions for January. Buoyed from his breakthrough race in the Stirling International Cross-Country two weeks ago, Patrick McNiff set off at the head of the field from the gun. At the top of the first climb he led by 5 metres and he continued to extend this. 15 metres by the end of lap one and 50 metres by the end of lap 4 of 5. It wasn’t easy though. Eskander Turki, known as ‘Alex’, is a refugee from Ethiopia seeking asylum in Belfast and running for Annadale Striders and he never gave up – in the end having to accept 2nd place 15 seconds behind McNiff. In third as well, Russell White competed at the Rio Olympics in the triathlon and has a 30:18 10k PB under his belt too. So it was a dominant display of running and a well-deserved title to go one better than his 2nd place from 2019. His time of 25:41 was excellent for the 5 mile distance on the country. 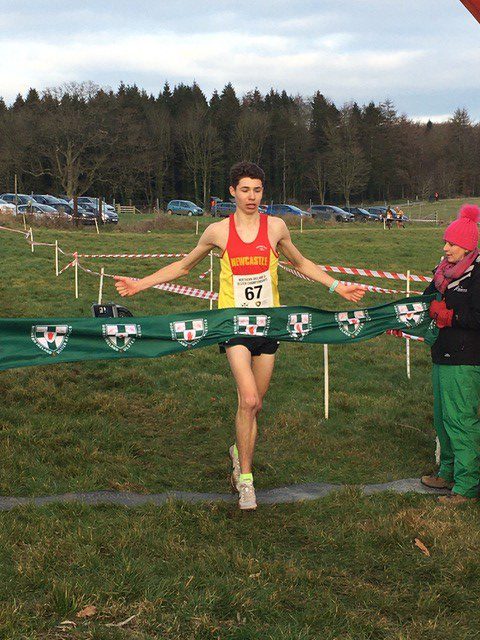 The team had won the title the year before but all were ineligible for this year’s intermediate with the exception of McNiff as he is still only 20. Mountain specialist Mark Stephens was the next man home in 13th (28:30) with his best run over the country. Connaire McVeigh had his best race as a Master coming home in 17th in 28:46. In 2018, JP Gartland had a great run in Dundonald but the team missed out on a medal. In 2019, the team won the title but Gartland was 7th and didn’t make the scoring six. This year he made amends and got his just rewards, 5th scorer on the team, 26th in 29:46 and a big contribution to the bronze medal. James King is relatively new to the sport of running and a complete novice at cross-country but that didn’t stop him making it to 6th and final counter in 27th just a second behind Gartland.