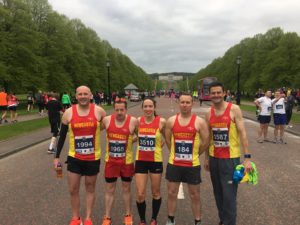 Some of Team NAC at the start line – Fegan, McAuley, Gosling, Meehan and Rodgers – the calm before the storm.

For the second Sunday in a row members of Newcastle AC took to the streets to complete 26.2 hard and unforgiving miles; this time it was the Belfast City Marathon. With a new course designed to be more user friendly and less hilly and the Marathon taking place on Sunday for the first time in the 38 year history of the event, organisers were confident of a successful relaunch.

Controversy
Both decisions proved controversial for different reasons. Initially there was opposition to the event taking place on a Sunday and the departure from the traditional Monday Bank Holiday was heavily criticised in some circles. In the aftermath, most would now agree that this was a sensible decision, allowing competitors travelling to the event the luxury of not rushing home to perhaps attend work on Tuesday. The second controversy arose on the day as early on many, including the designated pacers realised that the course was measuring long. This is not the forum for a debate on what went wrong, but suffice to say the runners completed around 0.4 of a mile more than they were supposed to. To the uninitiated, this may seem a mere bagatelle, but to those who have trained for 18 weeks and are following a pre-determined pacing schedule, it means everything.  To their credit, the organisers responded and adjusted times though how precisely this can be done is a matter of conjecture. Promises have been made to learn from the mistakes made and ensure that nothing similar happens in 2020. Let’s hope that this is the case and that this event is not remembered for all the wrong reasons.

Notwithstanding the publicity received for all the wrong reasons, the event itself left much cause for celebration. The course was certainly an improvement on recent years despite retaining a few undulations and a number of sharp turns. Support along the way was generally good, though there were occasional lonely places where spectators were thin on the ground. From the vantage point of supporting on two wheels, we were able to get to a number of locations to see our favourites and were certainly impressed by the atmosphere at the relay change over point on the Falls Road, along Oxford Street at the Waterfront and the massive crowds on the Ormeau Road and along the Embankment. For those supporting on foot there were opportunities to see the runners at least 4 times which certainly offered a big lift to those taking on the challenge.

Conditions
Conditions were ideal for marathon running, though a little cooler than desirable for spectating! The rain stayed away for the most part and the temperature remained steady, ensuring that athletes were not overheating. The occasional gentle wind offered further relief. 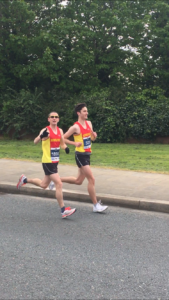 Brown and Molloy taking it all in their stride.

Performances
So how did the class of 2019 in Belfast get on? First home was young Daniel Molloy in his inaugural marathon at the age of 19. A man more widely renowned for his fast times at Castlewellan parkrun, he made the huge step up from 5k to 42k to see what it was like – the exuberance of youth. Daniel found the trip to his liking and sensibly paced by Brown for the first 22 miles was able to kick on and record an impressive 2:52:47 on debut. He claims that he will take a break from marathon running for around 20 years before thinking of taking on another one – alas his ‘Good for Age’ will have expired by then! Next home was Jonny Crutchley. Jonny had completed London in a career defining 2:55 a week earlier. Despite the many kind (and a few unkind!) words of wisdom offered by club mates during the week about the folly of running Belfast so soon, he took to the line and produced a totally remarkable and inspiring performance, coming home in 2:57:49. He looked so relaxed throughout and appeared to be out for a Sunday morning recovery run. Frantic searches are underway to find him a marathon for next Sunday! 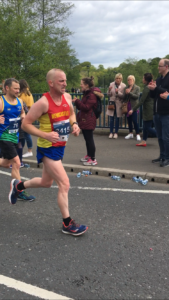 Aidan Brown and Wonderwall finished very close together. Aidan had been well on course for another sub 3 and had worked very well with Molloy for most of the race. Alas, it was one of those ‘almost, but not quite’ occasions. Brown was philosophical afterwards and is determined to add another sub 3 to his CV next time out. For Wonderwall this was a great performance. His training had not been as thorough or as consistent as he would have liked and at one point he considered not taking the line. However, FOMO got the better of him and he duly rocked up raring to go. Not being one to shy away from a challenge, he went for it and can be very pleased with his run. The story ends well as he crossed the line unaided and knew his own name at the finish, for once! There is still plenty more to come from these lads.

Bob Brown was next to break the tape in a very impressive 3:08:28. Every time we say him pass, he was smiling and appeared to be cruising and was rewarded with an impressive PB 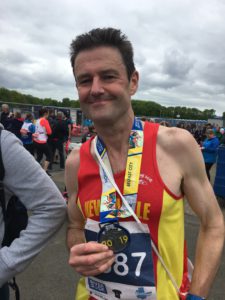 Coach Rodgers was next home and was unanimously declared the worthy recipient of the coveted MOTM award by the Prophet. Richard had committed to this in early January and left no stone unturned in terms of lifestyle and training. His meticulous programme, followed while still looking after the training needs of a number of other leading athletes, is testimony to his commitment to running. His conservatively steady pace in the first half allowed him to push on hard in the second half, arguably the hillier, and record an outstanding 6 minute negative split. He obviously paid attention in class the day the lesson was on the ’20 mile warm up for a 6 mile race’. Rodgers was extremely comfortable throughout and claims to have ‘thoroughly enjoyed it’. With a Good for Age secured for London 2020, he will no doubt be aiming to keep this high level of performance up. Not too far behind was Ruairi Donnelly. Donnelly made the sensible choice of hugging the 3:15 pacer and using their experience to see him home. He resisted the temptation to go harder early on when feeling good and finished strongly.

Ultra
While the exploits of Crutchley seem incredible, the efforts of another are equally remarkable. While most were in London, Gerry Kingston was at a 56 mile ultra-marathon in Scotland. Gerry recovered well in the week and recorded 3:25:49 to round off what can only be described as a busy week! 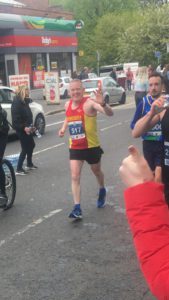 PRD
Aine Gosling ran with Rodgers for the first half, knowing that she needed to pace herself to ensure the second half went to plan. This she did as came home strong in 3:22:33. She cited the tremendous support proffered throughout as a key factor in keeping her going right to the end. GMAC may be small, but he sure packs a punch and the Downpatrick man never gave up despite finding the later stages tough. With dogged determination, he saw it through. The same can be said of Niall Carson, who having lost some training time through injury was resolute in his desire to make it to the end and worked hard to break 3:30, doing so with a minute to spare.

While some were finding the last climb up the Ormeau Road to the Rosetta roundabout a challenge, Franky McGivern (3:28:20) was scything through the field like a man possessed. With plenty left in the tank, he was able to pick runners off one by one as his confidence grew. Like Rodgers, his pacing was impeccable and he ran a negative split, taking 16 minutes off his 3:44 PB achieved in Derry last June. What a difference a year makes when you are committed to your raining and running injury-free. 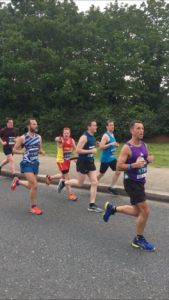 Protégé
GMACs protégé Mickey Meehan was delighted with his 3:37:26 performance and like so many others suffered a little towards the end. Nonetheless, marathon runners are made of stern stuff and somehow can dig deep enough to get themselves over the line. Peter Morgan was another man with a plan and he stuck to it. He found great company in the 4 lads from East Down AC (Philip, Gareth, James and Stephen) and ran most of the way in their group. Despite a bit of a wobble, he regained his composure to finish well. A word of commiseration to Kris Fegan who was forced to step off the road at 22 miles. Having been there and done that, it is a horrible feeling as finishing, however slowly is always preferable to a DNF. Head up Kris and no doubt the next one will be a good one. 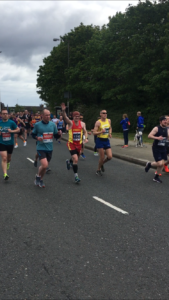 Carson pays tribute to the support.

Support
As always the athletes wanted me to thank everyone who got up early and made their way to Belfast to support. They remain steadfast in their belief that this level of commitment was a contributory factor to their success and kept them motivated throughout. From experience, I know that turning a corner in a marathon and seeing someone you know cheering you on can make all the difference. Well done also to our fellow athletes from local clubs who produced excellent performances on the day.

Cha
With the spring marathon season drawing to a close, the final bit of work for the NAC faithful is to keep Charlie McAlinden in company for his last few long runs before the Walled City Derry Marathon on the first Saturday in June. 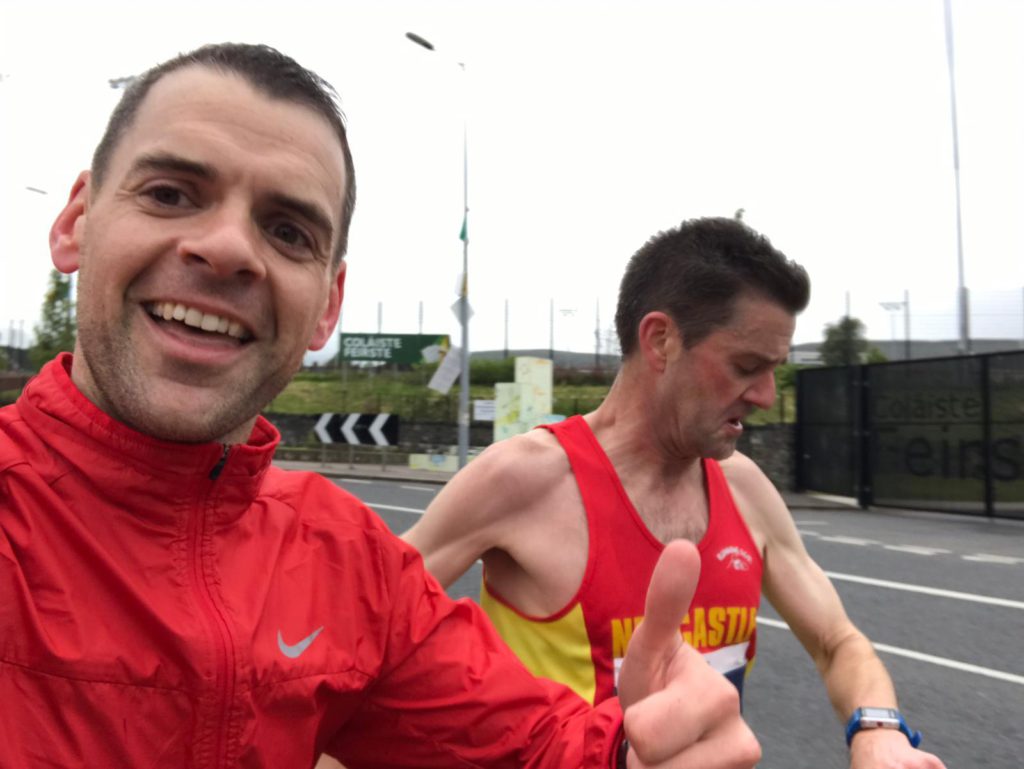 Never mind the watch, what about a selfie! 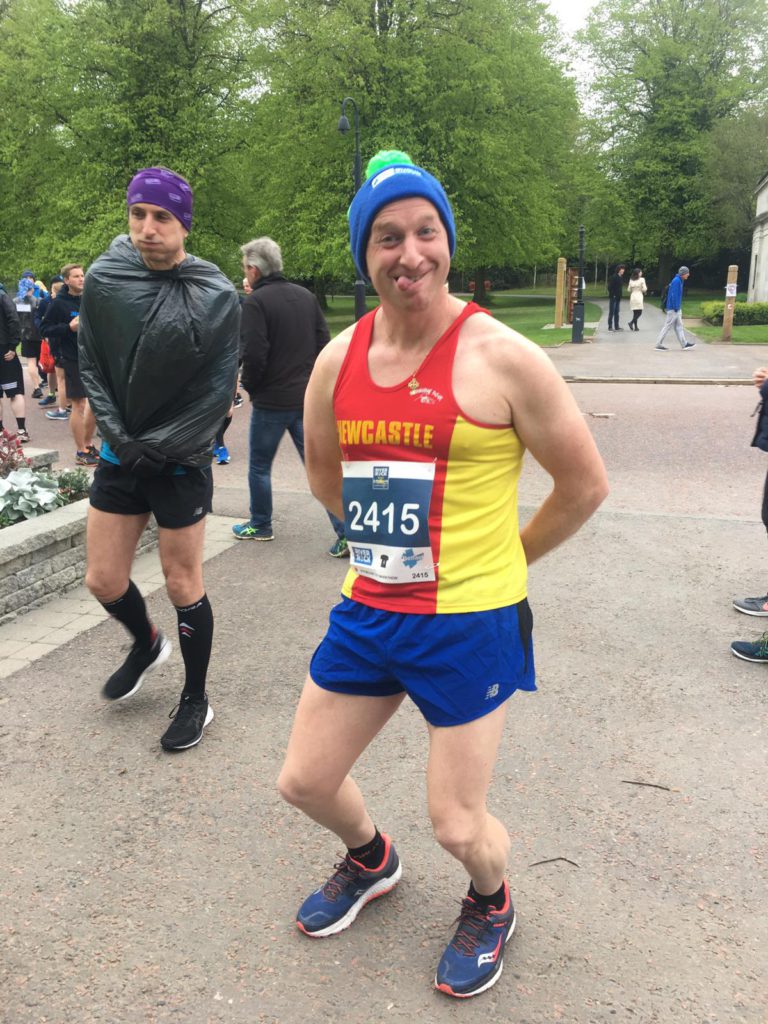